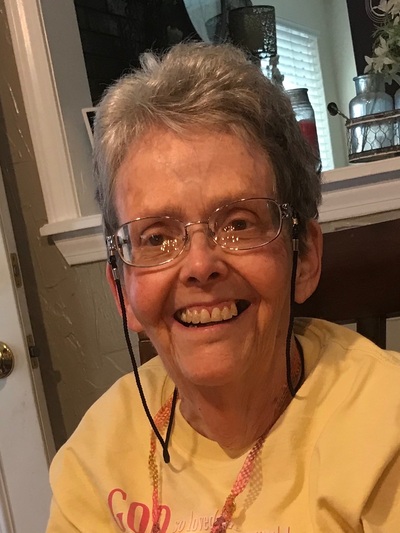 She was born June 25, 1941 to Ruby and Anthon Lawson in Arlington, Texas. The year she was born, the family headed to California. They got the news about Pearl Harbor on the way there, but decided to continue their move to the west coast. Nancy went to grade school in Pasadena, California.

She and her family moved back to Ft Worth, Texas in 1958 where she graduated from Castleberry High School. At age 17 she moved back to California to live with relatives and attend Azusa Pacific College, attaining a Bachelor’s Degree in Elementary Education in 1967. She was excited and proud of her first job as a kindergarten teacher in California, and stayed at that school until retirement in 1996. She humorously referred to her retirement as “graduating from kindergarten”. During her time in California, Nancy attended Pasadena First Church of the Nazarene. She was an active volunteer in their nursery and helped with children’s activities. While living near Pasadena, she also had the unique opportunity to join other volunteers to help build floats for the annual Rose Parade in Pasadena.

After retirement, Nancy moved to Prescott, Arizona where one of her friends also lived. She enjoyed the mountain life until moving to Oklahoma City in 2003 to be near her brother, John Lawson, his wife, and her nieces and nephews whom she loved.

In Oklahoma City, Nancy attended Lake Overholser Nazarene Church. She recently attended Highland Hills Baptist Church which was conveniently located near her residence and was a blessing to her during her last two years.

Nancy talked about two memorable trips – one was to Hawaii and one was a train across Canada. She enjoyed time playing with her cats, being with family, reading, word puzzles, listening to gospel music and watching old movies. She had a joke for every occasion and a silly or special hat for each holiday. She celebrated most holidays and birthdays with extended family gatherings including the Lawson family and Bolerjack family.

Nancy was preceded in death by her parents, Ruby and Anthon Lawson. She is survived by her brother, John Lawson of Oklahoma City and his wife Susan Lawson; her nephew Christopher Lawson of Oklahoma City, his wife Tiffany Lawson, and their two children Kaitlin Lawson and Caleb Lawson; her niece Angela Wylie of Gunter, Texas and her husband Tim Wylie and their three children Dillon Wylie, Lawson Wylie, and Jaxson Wylie; and her nephew Benjamin Lawson of Bethany, Oklahoma and his wife Anna Lawson.

Nancy became a Christian at a young age and lived her life honoring God and following His plan for her. We rejoice knowing she is in her eternal home, and we look forward to reuniting with her one day in heaven.