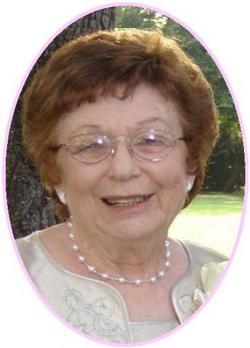 Nila Ruth McCorkle Ragsdale was born to Carl Curtis and Alice Donnelly McCorkle August 8th, 1930, in Collinsville, Texas. At the age of nine months, she came into the home of her loving grandparents, Mary and George McCorkle. In their home she was loved and doted on by her grandparents and their eight children, four of whom were still living in the home. They all considered her their little sister. To her, her grandparents were always Mother and Daddy. Nila was raised in a Christian home and was baptized into Christ as a teen. She was a lifelong member of the Churches of Christ. Her early education was in the Woodbine, TX school district, transferring to Gainesville for high school. At the time of her transfer, she skipped a grade and having a summer birthday, she graduated high school at the age of 16. The spring of her senior year she happened to meet a young man that was working in a grocery store in Collinsville, Texas. She had driven her parents there to buy groceries. He remarked to a co-worker that he would sure like to meet that petty girl with the red hair. After dating that spring and summer, Nila and James Elkin Ragsdale were married November 15th, 1947 at the Church of Christ in Sherman, TX. They immediately came to Oklahoma City, where Jim had employment with T G &Y and Nila took a job with Oklahoma Farm Bureau. To this marriage were born two children, Donna Leigh Ragsdale Fossey and James David Ragsdale. Several moves throughout the years took them to Texas, Oklahoma, Colorado, and back to Texas. They came home to Oklahoma City in 1987. Nila was a first rate typist and could always find work wherever they lived. While Jim had his own convenience stores, much of the time she worked a full time job and alongside him evenings and weekends. Even after retirement, she worked part time as cashier for Steve & Donna in their restaurant. Nila was an excellent homemaker, loving wife, mother, grandmother and great grandmother. She was a wonderful seamstress and her family was blessed with many clothes, crafts, theatre costumes, and even a beautiful wedding dress for her granddaughter-in-law. In recent years, she began the tradition of "Thursday Night at Mimi & Papa's" where the whole family gathered each week for a meal she prepared. She loved hearing about their families, their jobs, their accomplishments and their interests. She will always be remembered for her sweet spirit and loving kindness.

Nila is survived by her husband, Jim. Their marriage of almost sixty nine years is an inspiration to family and friends. Also left to treasure her memory is daughter Donna and son-in-law Steve and her son, David. She is also survived by three cherished grandchildren, Robert Nicholas Fossey and wife Benay, Katherine Elaine Fossey Loftin and husband Todd, Meghan Elizabeth Fossey Nesheva and husband Boris. She is also survived by two precious great grandchildren, Calvin Owens Fossey and Adelaide Morgan Loftin.

Thank you to her many friends and family for your love and care during the past few weeks. She loved you all.