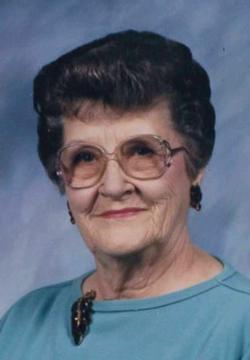 Nina was born in Sapulpa, OK to Samuel N. and May (Dunkin) Thorpe. She moved to Ponca City in 1932, then to OKC in 1949. She married Waterman "Dub" Davis on May 1, 1965. They moved to Columbus, MS in 1974 and then to Lake Tenkiller in 1985 and back to OKC in 1993. She was a member of Grace United Methodist Church. She worked at L & S Bearing Mfg from 1955-1967 as a production control manager. She also managed apartment from 1974-1984 for Lane Property management. She was preceded in death by her parents and her husband "Dub". She is survived by her son, James G. "Gary" Bernhardt and his wife Sandy; Step-daughter, Dorothy Logan; sister-inlaw, Donna Thorpe; 6 grandchildren, Kathy Bernhardt, Robert Bernhardt and his wife Vici, Kelly Bartley and her husband Jay, Jamie Logan, Johnny Randoll, Rick Scott, Lynden Scott; 10 great grandchildren. Visitation will be Wednesday from 10:00 AM until 8:00 PM at Buchanan Funeral Service. Service celebrating her life will be 10:00 AM, Thursday, October 15, 2015 in the chapel of Buchanan Funeral Service with interment to follow in Resurrection Memorial Cemetery.