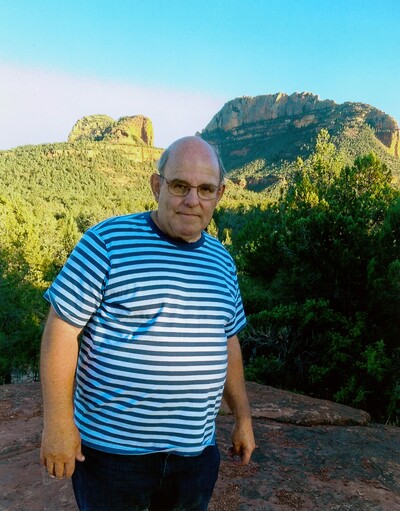 Paul Kevin McTighe was born February 14, 1951 in Waseca, MN to Willard McTighe and Audrey (Tosch) McTighe. He spent his early years in St Peter, MN before moving to Bixby, OK in 1969. He is a 1970 graduate of Bixby High School. He attended NE A&M College before finding a college home at East Central University in Ada. He graduated in 1975. After graduation he worked briefly at the family business, Shawnee Paving. He moved to Oklahoma DHS in 1978 beginning his career as a social worker before moving to the family support division in Oklahoma City. He retired from there January 1, 1998. He married Patricia Harp-Strode March 9, 1991. They have lived in OKC for the past 30 years where he was a member of St. Paul’s Lutheran Church. Paul loved sports especially OU football and Thunder basketball, attending games when he could. Paul and Pat moved to Concordia Senior Living Community in December 2019 to enjoy a stress free life. He is survived by his wife Pat and furbaby Macy Rose of the Home; Step-daughter Keri Spencer and Steve of Tahlequah; Granddaughters Kayla Spencer and fiancé Dillon Lively of Sharon, OK, and Tess Spencer-Grimes and husband Weston of Tahlequah; Three sisters, Jo McTighe of Oklahoma City, Chris Ivey and Cal of San Antonio, TX, Nan Jacks and Don of El Prado, NM. Nieces, Lynse Salas, Kristin Morrison and Nephew Nicholas Morrison of San Antonio, TX. He was preceded in death by his parents Willard and Audrey McTighe and Nephews Blake and Colin Bushong. Arrangements are under the direction of Buchanan Funeral Service in Oklahoma City and Luginbuel Funeral Home in Vinita, OK. Due to the pandemic, there will be a visitation at Buchanan’s on July 27 from 1:00 pm to 8:00 pm with the family present from 4:00 pm to 6:00 pm. There will be graveside services the Ketchum Cemetery. Rev. Skip McClain will officiate said services. Special thanks to the staff of Concordia Skilled Nursing for their love and care during Paul’s final weeks. Also special thanks to Good Shepard Hospice for their care in the transitioning during his final weeks. Memorials may be made to St. Paul’s Lutheran Church, 10600 N. Council Rd, Oklahoma City, OK 73162, or Concordia Life Care Community Foundation 7707 W. Britton Rd, Oklahoma City, OK 73132.