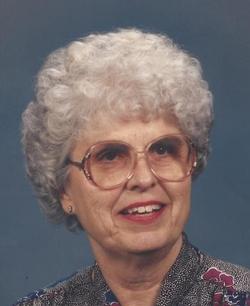 Peggy J. Manning, loving wife, mother, grandmother and friend, passed from this earth to be with her heavenly Father on June 27, 2013. Born June 9, 1930, Peggy was preceded in death by her parents, Merl and Gladys Robertson and brother Ramon. Peggy leaves behind her loving husband of 61 years, Art, and her two devoted sons, Robert & wife Carol, and John & wife Regina, and an assortment of grandchildren, great grandchildren, nieces and nephews.

Peggy was born in Detroit, Michigan and moved to Oklahoma City at the young age of 3
After graduating from Putman City High School, she received a bachelor's degree in home economics from Oklahoma A&M College (OSU) in Stillwater.

In addition to spending time with her family & friends, Peggy enjoyed singing at church and was a former member of the Sweet Adelines & Treble Clef choirs. Peggy was an armature artist. She loved nature, knitting and sewing – which was her specialty, winning awards and ribbons from local fairs.