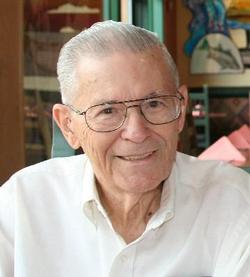 DOWNEY,
Reed Harmon Sr., another of those magnificent young men of the "Greatest Generation" who went to war in 1941, has passed from life to life on February 26, 2010. He was born September 24, 1922 in Hohenwald, TN. to John B. and Florence (Finnerty) Downey. The family moved to OK when he was 5, settling in Granite, OK. He was introduced to the love of his life, Joan Vannoy by his brother Ward. Reed and Joan were married March 14, 1942. He served in the Army as a combat infantryman. His last combat assignment was Iwo Jima relieving the Marines after major combat operations had ceased. Commenting on Iwo Jima, he said "I don't see how the Marines took it". After returning home he worked for a time with his brother, Flavil in the glass business. He went to work at Tinker field in 1950, but he had a strong desire to have his own business and in 1958 started Downey Glass Co. in Del City. He retired in the late 90's. Reed was a lover of Gospel Music and was a song leader in the Church of Christ most of his adult life. He loved to go to Singing Conventions, and for many years had singings at his place of business. He was the author of three gospel songs, writing both lyrics and music, two of which were published. This day he is singing in Heaven's Choir where all singers have perfect pitch and there's a multitude of new songs to sing. Reed was preceded in death by a son, Jerry L. Downey; his parents, John B. and Florence Downey; a sister, Alene; four brothers, Flavil, Melvin, Ward and Avery. He is survived by his wife of 67 years, Joan; a son, Reed Jr. and his wife Linda; four grandchildren, Shannon Richardson, Scott Downey, Mark Downey and Nicole Huerta; eleven great-grandchildren, nieces and nephews and many other friends and loved ones. Rather than flowers we request donations be made to "The Wounded Warrior Project". Services to celebrate his life will be 1:30 PM, Tuesday, March 2nd, Draper Park Christian Church with interment to follow at Sunny Lane Cemetery.