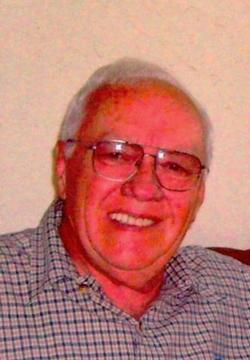 Richard "Dick" Thomas Buser died peacefully at home on October 1, 2012 with the loving support of his children and sisters. Dick was born in Wichita, KS on September 2, 1933 to C.D. "Bus" and Dorothy Buser. The family moved to OKC in 1935. Dick attended Corpus Christi, Rosary, and John Carroll schools and was in the first graduating class of what is now Bishop McGuinness Catholic High School in 1951. He attended OU for 5 semesters before being drafted and serving in the US Army in Germany. After his time in the service, he "saw the light" and enrolled in OSU where he earned a degree in Marketing and Sales. From that point on, he "bled orange" for his OSU Cowboys. His senior year he met his wife, Carolyn Lambert. They both graduated in the spring and were married December 26, 1959. Together they had 3 children; Ken, Jim, and Kathy of whom he was so proud. Dick successfully provided for his family as an optical salesman traveling Oklahoma and Kansas. He and Carolyn had homes in Denver, CO; Lubbock, TX; Albuquerque, NM; OKC; Stillwater, OK and Houston, TX before settling in Surrey Hills in OKC in 1971. They were charter members of Epiphany of the Lord Catholic Church where he served on the property board in the early years. Great relationships with priests and parishioners were fostered there. Dick was a member of the Surrey Hills Lions Club where he "flipped uncountable pancakes" at the semi-annual pancake breakfasts and thrived in the fellowship of Lions. He and Carolyn enjoyed many trips but his favorites were cruises including their 50th wedding celebration in 2009 with their children. The bigger the ship the better he liked it. Dick's greatest passion was boating. He liked to report that he had made 25 trips on the Arkansas River through the locks and dams. The number of boats grew from 1 boat with just his family to as many as 7 boats and 47 people. Many hours were spent teaching, with "great patience", his children, their friends, and nieces and nephews how to ski. He loved the days that were spent on Lake Tenkiller at the "Bee-hive" which he shared with his sisters, Betty and Janet, family and friends either on the deck or in the boat. Dick is survived and will be greatly missed by his wife, Carolyn; their sons, Kenneth Michael of Norman, OK and James Thomas and his wife, Marri; and his daughter, Katherine Marie and grandchildren Jamie and Dorsey Bradford, all of Hilton Head Island, SC; his sisters, Betty Borelli of Okarche, OK and her husband, Frank and their children, Mark, Jan, Gina, and Jill; and Janet Miller of Carrollton, TX and her husband, Jerry, and their children, Jennifer and Jaclyn; and aunts Sister Margaret Ann, SJ; Sister Mary Angela, BVM, and Mrs. Jane Fitch. A funeral Mass will be held at Epiphany of the Lord Catholic Church on Friday, October 5, 2012 at 11:00 A.M. with co-celebrants Father Stephen Bird and Father Marvin Leven. Lunch will be served to family and friends following the Mass. Private burial of his ashes will be at Memorial Park Cemetery. Donations in Dick's memory may be made to the Surrey Hills Lions Club. The family wishes to thank his caregivers, Visiting Angels and Integris Hospice Services.