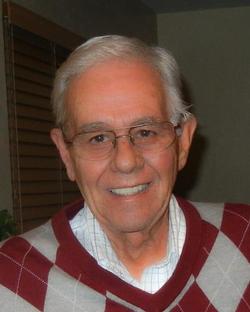 Richard Wells "Dick" Fenner, age 76, of Oklahoma City, passed away Saturday, February 20, 2016. He was born May 22, 1939, in Oklahoma City to Jack and Margaret Fenner. Dick graduated from Northwest Classen in 1957. He served in the U.S. Army Reserve and was a proud graduate of the University of Oklahoma. At 16, Dick began a 30-year career with Harmon Construction Company. In 1962, he married the love of his life, Virginia "Jenny" Dobelbower. Over the next 53 years, they shared their love with their children, Allyson, Brett, and Daniel. Dick spent many years involving himself in his children's activities, including coaching t-ball and softball and helping them with paper routes. His most important gift was his example of integrity, kindness to all, and a great sense of humor. Dick enjoyed traveling with Jenny, golfing, fishing, boating, and woodcarving. One of his great joys was spending time with his grandchildren. He attended many basketball, baseball, and soccer games. When they came to visit Papa on "fun day," there was always a coney in store. He was a proud friend of Bill W. for 32 years. Dick was preceded in death by his parents. He is survived by his wife Jenny; sister Jaci Finch and husband Doug; daughter Allyson Black and husband Charlie; son Brett Fenner and wife Jami; son Daniel Fenner and wife Shannon; and grandchildren Perry, Taylor, Andrew, Ethan, Jacqueline, Jack and Madeline. In lieu of flowers, memorial donations may be made in Dick's name to the St. Vincent De Paul Society through Epiphany Catholic Church. A prayer service will be held on Thursday, February 25th, 6:00 pm, at Epiphany Catholic Church, 7336 W. Britton Rd, Oklahoma City, OK 73132. A Funeral Mass will be celebrated on February 26, 2016 at 11:00 am, also at Epiphany.