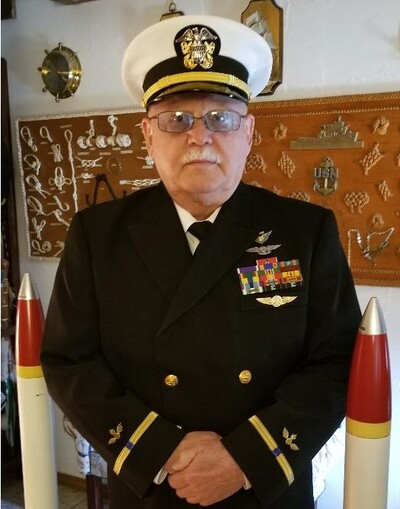 Richard Lee Green, “Gunner”, April 24, 1946 to August 16, 2020.  The Gunner has weighed anchor and departed on his final cruise to that undiscovered Country that no traveler ever returns.  Rick graduated Capitol Hill High School in 1965.  He joined the U.S. Navy and retired after 24 years with a distinguished career.  He served three tours in Vietnam with two different helo squadrons.  He received numerous awards and medals including The Bronze Star, Purple Heart and Air Medal.  He was a natural leader and friend to his sailors rising through the Enlisted ranks and into the Officer ranks.  After retiring he returned to OKC where he enjoyed traveling in his RV, riding his Harley, collecting antique militaria and the annual hunting trip with the boys,  Rick was a very gregarious person and loved to tell stories about his travels through life.  He could tell stories and jokes all day and never tell the same one twice.  He taught school before retiring a second time and loved his 7th and 8t grade students.  Rick was married to the love of his life Sue (Chandler) Green and she was never far from his side. She was his morning sunshine.  He always looked up to and was very proud of his children.  Daughter Shaa Marie and husband Mark, sons Robert Lee and wife Shannon and Shawn Bryan.  His grandchildren were his pride and joys.  Tristan, Victoria, Jewelia, Will, Auguste, Alec, Rebekah, Tyler, Bryan, Kaylee and Brooklynn.  He was a member of Draper Park Christian Church.  He enjoyed his many clubs and associations.  Rick never slowed down and was always on the go sun up to sun down.  His motto “Let’s go, we are burning daylight”.  “Fair Winds and Following Seas.”

We are all going to miss you so much Poppa.