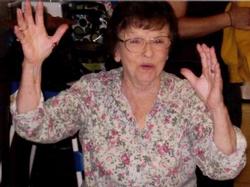 Ruby was born October 29, 1930 in Leighton, Alabama to Oscar G. and Alfie (Staggs) Kilburn. She worked as a layout operator for Western Electric. She married Robert Siemens in Fulton, MS August 25, 1949. Together the have 2 children: Robert Ronnie Siemens and Reginia Ann Siemens. Then in August 1983, she married Rodney Turner. She was a member of the Rebeccah Lodge in New Cambria, MO. She was preceded in death by her parents, her first husband Robert and their son Robert Ronnie Siemens. She is survived by her husband, Rodney Turner; Daughter, Reginia "Gina" Mason; 2 brothers, Odell Kilburn of Texas and Donald Kilburn of Florida; her sister, Betty and Charles Gladbach of Missouri; 4 grandchildren and 13 great grandchildren; 2 sisters-in-law, Faye Leppin and Wanda Ervie; brother-in-law, David Siemens; step children, Rodessa and Chad; 2 step grandchildren; 1 step great grandchild and many nieces and nephews. Services will be at 2:00 PM, Tuesday, May 26, 2015 in the chapel of White Chapel Funeral Home in Gladstone, MO.