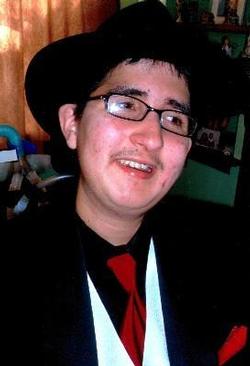 Ryan Joseph Cruz went to be with his Heavenly Father on May 11, 2010. He died from complications due to his life long battle with Duchenne Muscular Dystrophy. He was born in Oklahoma City on November 16, 1989. He attended schools in the Oklahoma City School district and graduated from Northwest Classen High in 2008. In spite of his disabilities and being wheelchair bound, he lived his school life to its fullest, making friends with a positive and caring outlook. Ryan was loved by many and was awarded the &#39;Sweetie Pie&#39; of his class. Ryan loved the Lord and along with his parents, attended Victory Church. His favorite part of the service was most definitely Pastor Marks sermons. They always made him laugh and think.
God gave Ryan the special gift of drawing and in his later years, with the aid of a special camera attached to his laptop computer monitor, was able to create pictures digitally. Fifteen of Ryan&#39;s pictures were shown at an art studio in the Paseo Arts District where he sold four pieces of his work. Ryan&#39;s favorite part of every year was going the Muscular Dystrophy camp. He loved to spend the week swimming, hiking, horseback riding etc, and hanging out with his buddies.
Ryan is survived by his parents Xavier and Judi Cruz, his sisters Megan and Lindsey and brother-in-law Josh. His Grandmother Joann Cruz and many other loving family members.
Funeral arrangements are being handled by Buchanan Funeral Service, Bethany. A memorial service will be held at Council Road Baptist Church, Bethany, OK on Saturday May 15th at 10:30am. Many thanks to all the tender loving care people have given to Ryan over the years from teachers, therapists, doctors, nurses and camp counselors, family and friends. Thank you also, to all those who have given their support in love and prayers throughout his life. It has been much appreciated. Ryan may have only walked for the first 6 years of his life, but by faith we know where he is now. He&#39;s playing football with the King!