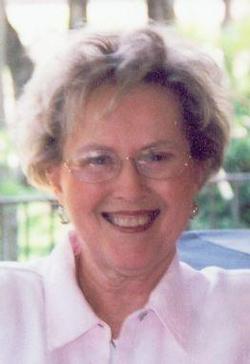 Sandra J. Walker, 81, of Oklahoma City, passed away at home on November 2, 2016 surrounded by her family. Sandra was born in Altus, Oklahoma on October 22,1935 to Dorothy(Green) and Melvin Abernathy. Sandra moved to Oklahoma City as a young child and graduated from Classen High School in 1953. She met the love of her life, Paul V Walker in April of 1954 and they married 6 months later.

Sandy was an active member of Cherokee Hills Church of Christ. For 28 years, she was an executive secretary for the State of Oklahoma Department of Education. Her hobbies were sewing and attending every sports event her children and grandchildren participated in, junior high, high school and college. Highlights of her week in her later years were Friday night hamburgers at Little Mikes with her friends.

Sandy was not only defined by kindness, she was the definition of kindness. It was her mission to make everyone comfortable, even at her own expense. Selflessness, sacrifice, considerate, self-denying, devoted, humble and warmhearted are descriptive of the words from those who knew her. Sandy used terms like darling, honey, precious and sweetheart to address those she cared most about. Even when it should have been about her, Sandy always turned the subject to be about others. It was never about how she was feeling, but rather how are you feeling? When situations were dire in most eyes, Sandy would always find the positive to make things brighter. She loved Jesus, Paul, her children and friends. When they were all happy, so was she. "What Would Jesus Do" was how she lived.