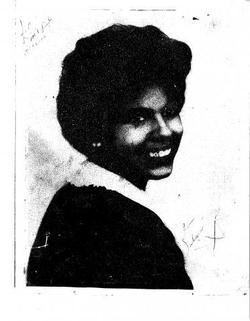 FERGUSON,
Selma Franklyn (Woody) was born December 13, 1938 in Oklahoma City to the late Willie Walter Woody and Willie Johnson. Selma was preceded in death by her parents, husband and two sisters; Bernita Smith and Lillian Nichols. She accepted Christ at a young age and attended Fairview Baptist Church under the late Rev. S. Fairly, and present Pastor John A. Reed, Jr. She was faithful in her church work, where she played both the piano and organ, as well as sang in the Choir. She attended Douglas High School graduating in 1956, where she excelled in academics and other activities. She was a member of the National Honor Society, the chorus, band (majorette), and was an accomplished soprano soloist having sung in the &quot;West Central Chorus Festival&quot;. She was an artist and enjoyed acting and classical music. Upon her graduation from high school, Selma became the first of her race to receive a scholarship to (OCW) Oklahoma College for Women at Chickasha, based on her musical talents and high school scholastic record. She also took part in a play at (UCO) University of Central Oklahoma called &quot;The Lonely Ones&quot;. Selma united in marriage to &quot;Master Sergeant&quot; Walter L. Ferguson and became a full time homemaker. She touched the lives of the many people that she met, and enjoyed spending time with her children, grandchildren, and all those that she came to know. She leaves to cherish her memory, her children: Walter Givens (Janet), Pamela Henry (Louis Jr.) , Linda Williams (David), Thomas Ferguson, Paul Ferguson (Peyton), Lamar Wilson II (Donyell), Shawn Wilson (Shere), and Demetrius Ferguson (Jacque); Sisters; Charlene Carter, Ida May Edwards, Johnnie May Smith and Willa June Nero; one brother, Robert Payne; twenty three grandchildren; three great-grandchildren (one on the way) and a host of nieces, nephews, other relatives and friends. The family wishes to extend a &quot;Thank you&quot; to the following staff at Manor Care, &quot;Kami Robinson, Tyrone Milton, Leah Felter, Shannon Daniels, Abbu Kabba and Meloyne Hampton. And a very, very special Thank you&quot; to Ms. Myah Wilcher. Private Family Services.