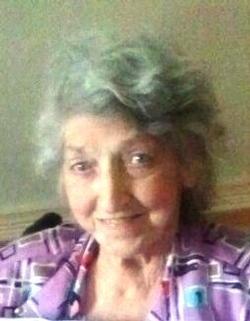 Sue lived her youth in Michigan, Tennessee, and graduated from Springfield High School in Akron, Ohio May 1947 where she had been the artist for the school's yearbook. She married Harold Odell Ward in March 1947 and began their family of three children in November 1948; all three children, Patti, Mike and Jeff, were born in Akron, Ohio.

Sue lived her adult life in Ohio, Arizona and the Moore, Norman, and Oklahoma City area of Oklahoma where she had lived since 1962. While she was raising her children Sue did little art work; she worked at Cattleman's Restaurant and Bill Moore's Steakhouse in OKC. After Acquiring Training through the OKC Vo-Tech system she began working at the Westinghouse Air Conditioner Plant in Norman in 1971 retiring in 1991.

Sue began painting again in 1980, quickly returning and surpassing her previous level of talent. Over the next several years she entered her paintings in numerous art shows; winning many blue ribbons and best of show awards.

Sue's best work was raising and loving her children, her precious grandchildren, and her most treasured gift, her great-grandchildren. Sue was loved by all.

Sue is preceded in death by her parents, Robert and Bertha Carter and brother, John Pierce Carter. She is survived by her children, Patricia Lane, Mike Ward and wife Donna, Jeff Ward and Wife Donna; sisters, Carol and Jean; brothers, Clyde, Ron, Larry, and Wayne; 7 grandchildren; and 17 great-grandchildren and many other family and friends.

Services to celebrate her life will be 2:00 pm, Saturday, April 23, 2016 at Surrey Hills Baptist Church.