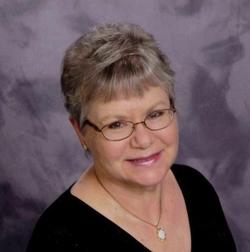 Born Joy Darline Allen, the 5th and last child of Geneva and Carl Allen, in Oklahoma City, OK. She was adopted August 6, 1956, by Florene and Roy Pickens. She was a life-long resident of OKC. She passed on January 8, 2015 after a 3-year battle with ALS – Lou Gehrig's disease.

Susan graduated from Putnam City High School in 1969, earned a BS in Education in 1972 and an MBA in 1979, both from Central State University (UCO). Susan was a certified Senior Professional in Human Resources. Susan work as an outplacement consultant for 16 years, coaching thousands of laid-off workers. She also taught management classes at UCO for a total of 20 years before retiring in December 2011.

Susan married her high school sweetheart, Barry James, on August 5, 1972. They adopted one child, Joy, born August 3, 1990. In addition to Barry and Joy, she is survived in her birth family, by sisters Barbara Sezate, Wanda Sawyer, Jan Funderburk, brother Jerry Estle and wife Rebecca, 8 nieces/nephews and 17 greats. In her adopted family she is survived by her sister-in-law Barbara James Schmidt and husband Dan. Susan was predeceased by both sets of parents.

Susan felt her greatest purpose in life was to have homeschooled Joy from 1st grade to graduation in 2009. After her diagnosis, Susan was active in various ALS groups and appeared on the 2012 MDA Telethon. Prior to being diagnosed with ALS, She enjoyed gardening, fishing, long walks with her dog "Tassie" and just being a mom.

Services will be at 2pm in the Chapel at Crossings Community Church, 16400 North Portland Avenue, on Monday, January 12th, officiated by Deidra Franklin and Stephen Sezate, coordinated by Buchanan Funeral Service, with interment to follow at Frisco Cemetery.

Special thanks to Brian Gabbard for his support during her illness and Dr. Brent Beson and staff at the Integris Southwest ALS Clinic and to her caregivers. In lieu of flowers, contributions may be made to MDA/ALS-Research.

Hers was a life summed up by Romans 8:28 – "And we know thatGod causesall things to work together for good to those who love God, to those who arecalled according toHispurpose." Susan loved her Lord and is celebrating in heaven with Him.