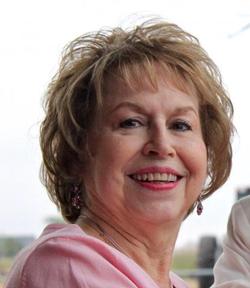 Sylvia Jean Foster, 79, of Oklahoma City, passed away peacefully at home on October 22, 2016, after a short battle with non-Hodgkin lymphoma. Sylvia was born in Shreveport, LA, on November 5, 1936, to Gene and Jewell (Little) Sullivan. Sylvia moved to Oklahoma as a young child and graduated from Central High School in 1954. She met the love of her life, Billy G. Foster, in 1956, and they married in 1958. They welcomed their son, Barry, in 1964. For 32 years, Sylvia worked in Kerr McGee's Oil & Gas Division as an Executive Secretary, and she was a 50+-year member of St. Mark's United Methodist Church. Bill and Sylvia were married for 52 years before his death in 2010. Sylvia loved traveling with family and friends and playing golf, bridge, and bunco, but most of her enjoyment came from spending time with her only grandson, Mika! Sylvia is survived by her son, Barry, and his wife, Milana; grandson, Mika; brothers, Jim and Tom Sullivan; and a host of other family members and close friends. She was preceded in death by her parents and husband. Viewing will be at Buchanan Funeral Service on Tuesday, October 25, from noon to 8 p.m., with family present from 6 p.m. to 8 p.m. Funeral services will be held at 10 a.m. on Wednesday, October 26, 2016, at St. Mark's United Methodist Church in Bethany. Interment will follow at Resurrection Cemetery. In lieu of flowers, donations may be made to the Leukemia & Lymphoma Society or a charity of your choice.