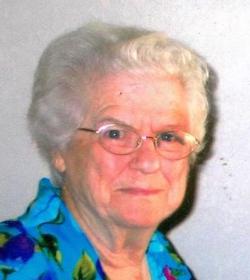 Sylvia &quot;Alice&quot; Ralls was born September 13, 1921 to Charles B. and Lena Valentine Crosswell in Old Bokoshe. She departed this earth Saturday, April 30, 2011 in Oklahoma City.
She was preceded in death by her parents, her husband, James Allen Ralls, two brothers, Chester Crosswell and Frank Crosswell. She is survived by two children, Jerry Ralls and his wife Nancy of Keller, Texas and Phyllis Mitchell and her husband Dennis of Yukon, Oklahoma; four grandchildren, Carmen Reed, Jeffrey Ralls, Lesley Howe and Karel Mitchell; four great grandchildren, Jacob Ralls, Hunter Reed, Taylor Reed and Atticus Howe; and five sisters, Lillian Crosgrove, Mary Ritter, Oleta Hargis, Ann Greening and Charlene Morton.
On April 15, 1942 she was married to James Allen Ralls of Bokoshe. During the early years of their marriage James served in the US Army during World War II and they were stationed at various locations in the US. After his discharge they settled in Okmulgee, Oklahoma where James went to school to learn the plumbing trade. They subsequently lived in Bartlesville and Tulsa before moving to Broken Arrow to start their own business, Broken Arrow Plumbing and Heating. Alice served as the Office Manager for the business. In 1980 they relocated to a peaceful farm near Vian and enjoyed over 20 years of retired life before James&#39; death in 2002. This farm served as a haven for her grandchildren. They loved visiting the farm, fishing, gardening and riding Cricket, the family horse and helping &quot;Grandma Alice&quot; can and freeze vegetables from their expansive garden. Eight years ago Alice moved to the Oklahoma City area to be near her daughter Phyllis.
Alice&#39;s Christian faith was foremost in her life. She loved to teach Sunday school and always said that she liked to teach the 4 and 5 year olds best, because the older kids already knew it all. To make her classes interesting she had a diorama for nearly every story, and always fascinated her students by turning water into grape Kool-Aid. Alice faithfully attended Church three times a week. Even after she was unable to attend due to Alzheimer&#39;s she still thought and told everyone that she attended services three times a week.
For her family, like most families, food played an important role in their social life, and Alice was considered one of the best cooks in Oklahoma, at least by her children and grandchildren.
Children were her real love, but she also enjoyed gardening, sewing, fishing and just sitting outside in the evening watching the humming birds and squirrels. Her flowers often graced the Church building and her grandchildren were the beneficiaries of many of her homemade quilts.
Everyone she met described her as one of the sweetest people they had ever known. This was most recently made evident by the emotional reaction of her care givers at PARCWAY during her passing. She will surely be missed by all who love her.