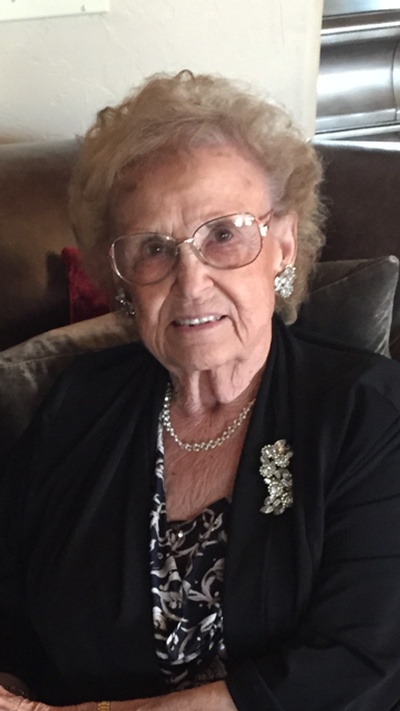 Vida Mae (Magee) Farley Bowles, 96 l/2, passed from this life into an eternal one on May 16, 2018.  Born November 14, 1921, in Montague, Texas, the daughter of Nettie (Blackburn) and John Magee.  Vida married Clifford Farley on March 29, 1937, and resided in Cookietown, Oklahoma.  They had three daughters.  Vida had a second marriage to Ben (BJ) Bowles and resided in Burkburnett, Texas, prior to moving to Oklahoma City.

Vida was a homemaker, nurses aid and retail sales associate.  She loved the outdoors, working in her garden and planting her beautiful flowers.  She was a true artist, avid painter and jewelry maker.  She had a beautiful singing voice and was the lead soloist in the Union Valley Chorale Group that traveled across the United States.  Vida’s passion was her family and she cherished every moment with them.

Vida was a member of the Cherokee Hills Church of Christ.  Her love for Christ and her love for studying  God’s Word was shown in her actions daily.

Vida was preceded in death by her parents; 12 brothers and sisters; daughter, Sandra Weidman and husband Harvey Weidman; first husband, Clifford Farley; second husband, B. J. “Ben” Bowles; and son-in-law, Earl Neese. Vida is survived by her daughters, Shirley Farley and Terry Neese; grandchildren, Greg Shaw (Anna), Jeff Brock (Jeanette), Kim Neese (Buddy Belt), Mike Shaw (Amy), and Jana Whisenhunt (Mike); 8 great grandchildren, Ryan, Ella, Melissa, Haley, Emily, Erin, Lauren and Evan and many other family members and friends. Visitation will be 1-8 pm Tuesday, May 22, 2018, with family receiving guests from 5-7 pm at Buchanan Funeral Service. Services to celebrate her life will be 10 am, Wednesday, May 23, 2018 in the chapel of Buchanan Funeral Service with interment at 2:00 pm at the Walters Cemetery in Walters, Oklahoma.  In lieu of flowers, donations to the Vida Farley Bowles Scholarship Fund can be made in her honor at www.ieew.org.