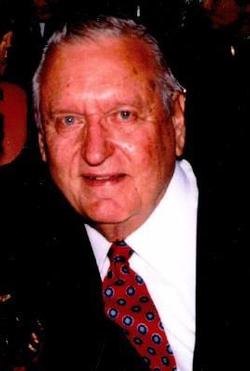 Wallace Hardison Collins (86) passed away Friday, after a lengthy battle with Alzheimers. He was born May 6, 1925 in Milford, MA, the only child of Wallace H. and Marion Tarbox Collins. He is survived by his wife Emogene Gunter Collins; two children, Wallace H. Collins, III and Melissa Ann Elder (Craig); a grandson, Matthew C. Elder (Anna). He graduated from Wichita Falls High School. His mother walked across the stage and received his diploma so that he could enlist in the Navy in lieu of being drafted. He received training as a Pre-Radio Technician at Chicago Univ.; Univ. of Houston, Treasure Island and then served on the Aircraft Carrier USS Shangri-LA (CV-38) in WW II in the South Pacific. He received the WW II Victory Medal, American Campaign Medal, Asiatic-Pacific Campaign Medal 2 stars. He was honorably discharged 3-24-46. He received a Bachelor of Science degree in Electrical Engineering from Texas Tech University, Lubbock, TX and studied Mechanical Engineering at Oklahoma State University. He continued the long line of the Collins family involvement in petroleum exploration then joined Humble Oil and Refining Company, Houston, TX and then transferred to FAA in OKC. In 1967 he accepted a position as Electronic Systems Advisor to the Spanish Air Ministry. In 1968 he accepted a similar position in Athens, Greece. He and his family returned to OKC in 1969, where he became Systems Engineer on the largest computer system maintained by FAA. In 1975 he accepted a position as an expert in the Technical Assistance Program of the UN in Sao Jose dos Campos, Brazil (ICAO). He enjoyed sailing, tennis, and hiking with his family in CO and most of all, table tennis. He was a coach for the US Table Tennis Assoc. and President of the OKC Table Tennis club for many years. He was a consummate joke teller who never met a stranger and always got laughs even when the joke wasn&#39;t too funny. He was a member of the Greatest Generation and was a gentleman of the old school. Mr. and Mrs. Collins were long time members of St. Luke&#39;s UMC and a Memorial Service to celebrate his life will be 2:00 PM, Thursday, Jan. 19 at St. Luke&#39;s. The family asks that in lieu of flowers donations be made to the Alzheimer&#39;s Association.