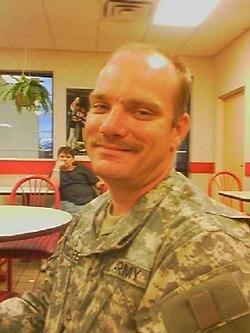 CARICOFE,
William "Bill" Allen, age 37 of OKC, died August 27, 2010. He was born February 8, 1973 in Columbus, OH to Don and Glenna "McCray" Caricofe. Bill was a Sgt with the OK Army National Guard and proudly served his country. He is survived by his wife Shana Caricofe and 4 children, Ashley, Savannah, Katelyn and Dalton all of the home; father, Don Caricofe; mother, Glenna Wyatt; brother, Douglas Wyatt; sister, Brandie Wyatt; and his "Adopted parents" Jim and Renee Buel. Bill will be missed by all that knew him. Visitation will be Monday, August 30th from 8:30 am to 8:30 pm. Services to celebrate his life will be 2:00 pm, Tuesday, August 31 at Buchanan Funeral Service Chapel with interment at Resurrection Memorial Cemetery with military honors.