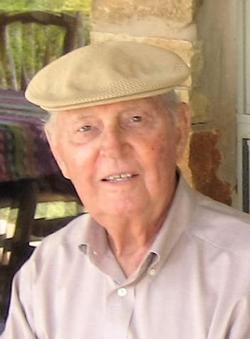 Bill Barton lived 86 good years. He was a New Year's baby, born on January 1, 1930 to Homer and Susie Barton on a small farm outside Lone Wolf, Oklahoma. He felt fortunate to have grown up in the small town culture of Hobart. Luckily for both, Mary Jo moved from California to Hobart as a sophomore in high school where Bill was a junior. They were married on January 28, 1951. Bill joined the USAF in July, 1951, and spent his four years of active duty in Panama City, Florida where their love of The Beach was born.

Bill graduated from Oklahoma State University and has bled orange ever since. His career began in Forrest, Illinois . . .too cold up there. They moved to McAlester where he began a new career after graduating mortuary school in Dallas. His innate kindness and gentle spirit were the perfect characteristics for serving families. In 1977 he bought Smith Funeral Home in Ada. While Bill and Mary Jo enjoyed the Ada years, they were ready for City living and moved to Oklahoma City in 1982. Bill managed several local funeral homes before retiring in1995 after 33 years in the funeral business.

By then he had three perfect grandchildren and devoted his time to taking them golfing, on trips to the beach, and to fun destinations in the state, as well as baseball, soccer, basketball, and school activities. Bill also discovered a latent talent for sketching and painting, he eagerly attended art classes at the Will Rogers Garden Center. He nourished indoor and outdoor plants, refusing to let a plant die.

Bill was a member of St. Luke's United Methodist Church and Insight Class. In 2003 he was asked to be a part of developing a Columbarium at St. Luke's. He derived pleasure in the success of the Columbarium and Memorial Gardens.

Bill was preceded in death by his parents and his siblings, Betty (Bock), Jim and John. Survivors include his wife, Mary Jo, his children: Craig (Fran) and Joni (Randy Rybicki) and grandchildren: Sarah (Cory Fahringer), Sam Rybicki, Michael Rybicki and Drew Addington, and nieces and nephews.

A Memorial Service will be held on Tuesday, October 4, 2016, at 2:00 p.m, at St. Luke's United Methodist Church. In lieu of flowers, the family suggests a donation to St. Luke's Music Ministry.