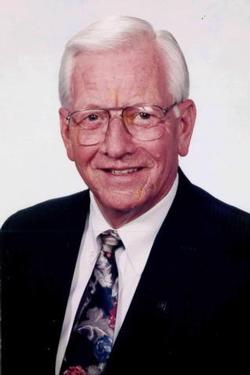 Al Edward Crenshaw, one of the kindest and gentlest of men made his journey to Heaven on Wednesday, September 3, 2014. He will always be remembered by all who knew him by his loving nature, his quiet personality, his dry sense of humor and his silver hair- You could always find him in a crowd of people. Al was born to his parents Cecil and Martha Mae Crenshaw on Saturday, August 25, 1928 in his grandparents' home in Marlow, OK. He graduated from Duncan High School in 1947 and in his early years he worked in the oil business. He later decided that he wanted to pursue a career in the funeral business. He attended Dallas Institute-Gupton-Jones College of Mortuary Science in 1954 which began his career where he served the people of OK for over 55 years with dignity and kindness. He always made his grieving families feel "all would be well". He was a very proud father of sons Chris, Craig, Clay, and Rob and daughter, Sherri Elaine. He was a member in the Sertoma Club of OKC and was President from 1980 thru 1982. Al was a member of Western Oaks Christian Church OKC. Al was preceded in death by his parents, Cecil and Martha Mae Crenshaw; sons Chris and Rob; grandson Seth and great-granddaughter Natalie Elaine Pearce. Al is survived by his wife Dora Ann of OKC; sons, Craig and wife Michelle Crenshaw of Choctaw, Clay Crenshaw of Stillwater; daughter Sherri and husband Paul Pearce of Carrollton, TX; 9 grandchildren; one great-great grandson; his sister Peggy Tinsley of OKC as well as many other beloved family members and treasured friends. Visitation will be Friday, September 5, 2014 from noon to 8PM. Services to celebrate his life will be 2:00 PM, Saturday, September 6, 2014 at Buchanan Funeral Service Chapel with interment to follow at Chapel Hill Memorial Gardens. In lieu of flower please make donations to The Shriners Hospital in Philadelphia 3551 N. Broad St. Philadelphia, PA 19140-4131. We will be seeing YOU Big Al – one day