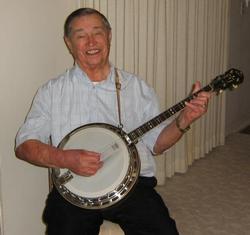 Albert enlisted in the Army Air corps (later converted to US Air Force) in 1940 where he was trained as a gunner on B-24's and served as a radio operator on B-24, B-17 and A-29 aircraft through WWII. He served during the Korean War as a flight crew member on search and rescue missions in the Pacific. He was honourably discharged from military service in November 1960. He entered civil service with the Federal Aviation Administration in 1961 where he served as an inventory management specialist retiring in 1994 with a total of 53 years government service.

Albert was a loving husband and father whose heart was filled with a spirit of service and caring for others. He was a gifted musician with a rare talent for playing the 4 string banjo and chromatic harmonica. Together with his wife, Ann, Albert used his musical talent to serve the Lord as a minister in various prisons and nursing homes for over 30 years.

Along with his Wife, six children and their spouses, Albert also leaves behind an extended family including fourteen grandchildren, sixteen great grandchildren.