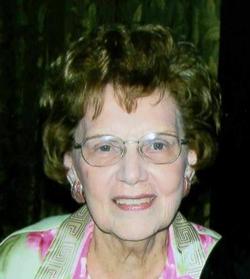 Alice Emma (Scott) Robison, 91, of Oklahoma City, OK was called home to be with her Heavenly Father on Jan. 29, 2015. Born in Apache, OK on Aug. 12, 1923 she was one of nine children born to John Beecher and Avis Margaret (Holler) Scott. Her marriage of 65 years to her high school sweet heart and love of her life, Charles (Charlie) Robison, began on April 8, 1944 and ended only with his passing in 2010. Alice was a devoted daughter, sister, wife, mother, grandmother and great grandmother. Her happiest times were spent bringing family together to celebrate life's occasions. Her homemade birthday cakes and Thanksgiving dinners will be especially missed. Alice enjoyed cooking, gardening, reading, taking care of her home and in the last few years Thunder Basketball. "Nan", as she was known by her family, was a devoted member of her church, and used her quiet, behind the scenes gifts to serve others. She has passed her legacy of faith down to the next generation, leaving behind a living example of dependence on God. Alice was preceded in death by her parents; her loving husband Charlie; brothers, Walter, Blake, Wayne and Charles Scott; sisters, Helen Sinclair, Hazel Loftis, Mary Fleming and brother-in-law, Jim Dulin. She is survived by her sister Margaret Dulin, daughter Kathey Duncan and husband Pat, grandson Patrick Duncan and wife Brandi, granddaughter Berkly Edwards and husband Erik and great-granddaughters Madison and Makenzi Duncan, and Delaney Brewer. The family has requested that, in lieu of flowers, donations be made to the Wednesday morning Women's Bible Study c/o North MacArthur Church of Christ, 9300 N. MacArthur, Oklahoma City, OK 73132. Visitation will be from noon to 8pm on Sunday. The service will be held at 1:00 pm, Tuesday, Feb. 3, 2015 at North MacArthur Church of Christ. Interment will follow at Memorial Park.