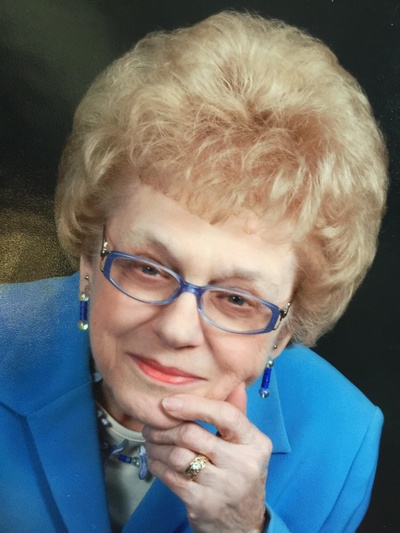 Ann (Anzetta) Cooper, age 89, died Monday, July 10, 2017. She was born September 6, 1927, in Hoffman, IL, to William Henry and Rosina Palm. She married Noel Cooper, the love of her life, September 26, 1953 and they were happily married for 59 years. They were introduced by a friend in St. Louis and were married in Hoffman, IL. Ann graduated from Carlyle High School, Carlyle, IL. She went to the big city of St. Louis and worked for Eli Walker Co. After marrying, Ann and Noel moved to Oklahoma City, OK. She worked for a film company, Warner Brothers, and then later on she worked for Local Federal Savings and Loan in the Mortgage department. Her favorite hobbies were baking and cooking and always looking for new recipes to make. She was a member of Our Savior Lutheran church for 56 years. She participated in many activities such as the Lutheran Woman’s Mission League and she was a member of the Tuesday with Friends singing group. Also, she was a part of a 30-year Bible study. After the passing of her husband Noel, she lived in Arbor House in Mustang, OK. She was frequently seen singing her favorite songs in the great room and was a delight to all. Her joyful and pleasant soul will be missed but we rejoice in her going to meet with her Heavenly Father.

Ann was preceded in death by her parents, her husband, and brother-in-law. She is survived by her daughter, Doris Mahan and fiancé Ron Hom; and granddaughter Erin Mahan; daughter Janet and her husband Larry Dockray and their children, son Riley and wife, Michelle, and daughter Kelsey Dockray; Ann’s son, Craig Cooper; Ann’s sister Eunice Carroll of Irvington, IL. and her daughter Lori and husband Russell, and their daughters, Emily Taylor and Denise Carroll; Ann’s brother, William (Bill) Palm and wife, Arlene of Carlyle, IL. and their sons, Phil Palm and wife, Linda and children; son Doug Palm and wife Jodi, and children; Ann’s niece, Shirley and husband Larry Bellew, and their children, Georgie Ann, Shannon, Mark and Ernie.

Visitation will be at Buchanan Funeral Service on Wednesday, July 12, from 6 to 8pm with family receiving visitors at that time. Viewing will also be at the church from 9:30-10a.m. on Thursday. Services will be Thursday, July 13, 2017, at 10 a.m. at the Lutheran Church of Our Savior, 6501 N.W. 23rd Street, Bethany, OK. Committal/Graveside will be at 2:30 p.m. at the Fairlawn Cemetery, Elk City, OK.