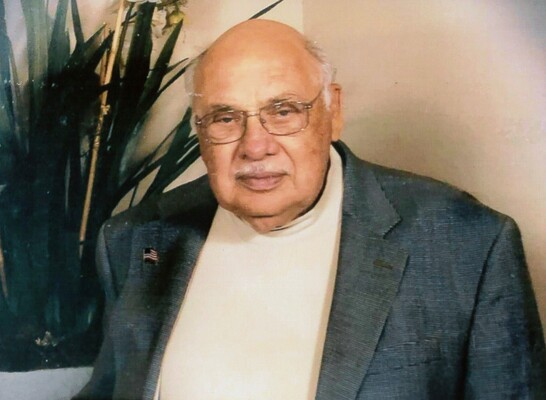 Ben was born on September 25th, 1931 to Harry and Lois Butler in Rosebud, TX. After graduating from Greenville High School in 1949, he went on to earn a business degree at East Texas College in Commerce, TX.

After graduation, he landed a job as a Sales Representative for Frigidaire Appliance Company, kicking off a 35 year career in the retail home appliance field. Ben’s career took him from Lubbock, TX to Ft. Worth, Minneapolis, Albuquerque, Dallas and finally landing in Oklahoma City as a District Sales Manager.

He served in the U. S. Air Force for two years during the Korean War, 1952-1954, obtaining the rank of Captain and receiving the National Defense Service Medal during his service. Ben served in the Air Force Reserves from 1954 – 1966.

After retiring in 1997, Ben spent his time as a perpetual member of Amity Lodge #473. Later he became a member of the Scottish Rite of Freemasonry and then a Shriner at India Temple in the Greeter Unit. He enjoyed the Shrine Circus and their many parades! He also served as a Deacon at Highland Hills Baptist Church and was a constant fixture there until entering the nursing home. After entering the nursing home, he enjoyed visits from all his friends and looked forward to monthly lunch dates with his buddies from church. He was the most kind hearted person you could meet! He loved his family with a passion and loved being with them.

The family would like to express their sincere appreciation to the staff at The Lakes Nursing Home for their excellent care over the past three years. Thank you also to Traditions Health Hospice Care and Buchanan Funeral Service for their help during this difficult time.

A memorial service is scheduled for Friday, April 16th at Highland Hills Baptist Church, Oklahoma City, OK at 10:00am. As per current guidelines, masks and social distancing will be required while in the church building.

Thank you all for all your thoughts and prayers! Ben (Dad, Daddad) was a shining example of a kind thoughtful Christian man that we should all pattern our lives after. “Well done, good and faithful servant.”

In lieu of flowers, memorials or donations may be made to: