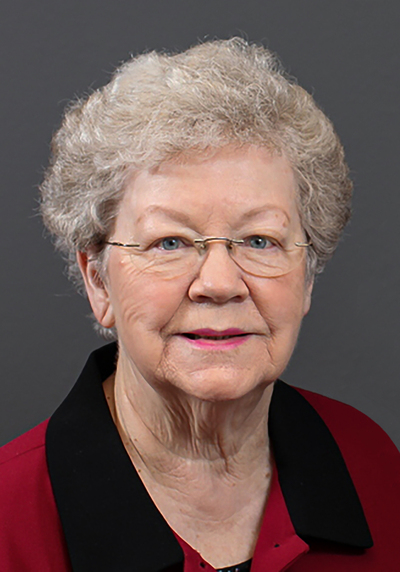 For the livestream of Betty Henry’s service please Click Here.

Betty Ann Henry passed from this life, and on to her eternal reward, on November 14, 2021, at the age of 88 years, eight months, and eight days. Betty Ann Henry (née Hughes) was born on March 6, 1933, to William Vaton Hughes and Stella Isom Hughes, in Aylesworth, Oklahoma. Betty was the youngest of six daughters. When Betty was five years old, the Hughes family moved to Kingston, Oklahoma, where Betty grew up. Betty attended and graduated from Kingston Public Schools, and she was the valedictorian of Kingston High School’s Class of 1950. It was in Kingston that Betty met the love of her life and future husband, George Skipworth (Skip) Henry, Jr.

Following high school, Betty, along with her mother and one of her sisters, moved to Oklahoma City. Betty worked in Oklahoma City for a year; however, Betty soon returned to Kingston and married Skip on August 31, 1951. After their wedding and honeymoon, Skip and Betty moved to Norman, Oklahoma, and Skip attended the University of Oklahoma. After two years, the couple moved to Oklahoma City. During the early years of their marriage, Betty worked for Kingwood Oil and Apco Oil Companies. In October 1953, Betty gave birth to their first son, George Skipworth (Kip) Henry, III. Betty then continued working until 1960, when she gave birth to their second son, Gary Lynn Henry. After Gary’s birth, Betty began her career as a full-time homemaker raising and nurturing the couple’s two boys.

During their 64 year marriage, Skip and Betty raised their two adoring sons, traveled across the United States and Europe, and attended hundreds of OU football games. Betty was a dedicated and lifelong fan of OU sports, especially football. Betty was also a natural musician, and she loved music. In particular, she developed her love of music in high school when she was a member of the band. In the high school band, Betty played oboe, and, despite having no formal training, Betty mastered the oboe. Betty also taught herself how to play the piano without any formal training. But Betty’s ultimate musical passion involved vocal music. For many years, she was a member of the Treble Clefs, an Oklahoma City PTA sponsored women’s choir. Then, in later years, Betty was a longtime member of the Christian women’s quartet, Sonshine. For approximately 15 years, Sonshine performed for churches, civic organizations, and other groups all across Oklahoma. And during those years, Sonshine produced two, full-length albums.

As a mother, Betty was very active in the lives of her sons, Kip and Gary. She was a long-time Cub Scout Den mother, school home room mother, PTA member, band booster member, band tour chaperone, and long-time Sunday school teacher. Betty was also very active in the lives of her beloved grandchildren and great-grandchildren, and she—along with Skip—faithfully and proudly attended countless concerts, plays, musicals, award ceremonies, and graduations. Finally, Betty was also a lifelong and faithful member of the Churches of Christ. At the time of her death, Betty was a member at North MacArthur Church of Christ.

Betty was preceded in death by her parents, William and Stella Hughes; her five older sisters, Virginia Hatfield, Catherine Stallings, Margurette Corbin, Mary Chloe Hughes, and Billie Hendrickson; and her beloved husband of 64 years, Skip. Betty is survived in death by her two sons: Kip (and his wife, Karen) and Gary (and his wife, Diane). Along with her two sons, Betty is survived by her four granddaughters: Alisha Turner (and her husband, Travis Turner), Caitlin Henry, Skylar Henry, and Tessa Henry (and her husband, Cooper Denton). Betty is also survived by a great-granddaughter, Maddison Newton, and three great-grandsons, Kameron, Austin, and Bryson Turner. Finally, Betty is survived by a host of loving of nieces, nephews, and cousins, as well as a multitude of friends.

The family would like to express their heartfelt gratitude to Alix Ruoff and the wonderful, dedicated nurses and caregivers at Heritage Point of Oklahoma City for their kindness, love, support, and wonderful care of Betty for the past two and a half years. The family would also like to extend many thanks to Nurse Jessie Sikich, Chaplain Terry Woodard, and the staff at Valir Hospice for their care and support during Betty’s final months of this earthly life and her transition into eternity. Each and every person Betty and her family encountered at Heritage Point and Valir Hospice was such a blessing and comfort to Betty and her family, and the family will be eternally grateful for such blessings.