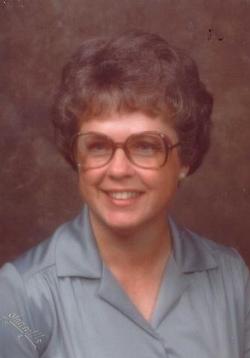 Betty Lou (AKA Mom) was born April 30th, 1931, to Thomas Frank Wood and Ola Mae Turner in Columbia, Boone County, Missouri. She was the only child and made many long-lasting friends at school, being popular at school dances and socials and with her family and cousins.
Spending all her childhood in and around Columbia, she developed the love of nature and animals, especially dogs. Her Dad raised champion Cocker Spaniels. Growing up during the Great Depression, she walked everywhere; to school, the store, parks and playgrounds, with her pet dog (Major or Duke) or with her mom and dad. She loved riding her bicycle with Major in a wicker basket attached to the bike. She spent a lot of time at her Aunt Lou's home after school until it was time to go home for supper. Aunt Lou lived on the next street over and Mom and Aunt Lou's boys always had a great time doing things together.
When she was 15 years old, a very cute 19 year old young man, Phil, moved into a house across the street. He was tall and handsome. He thought she was cute too!!! He even described her in a homework assignment entitled, "My All-Time Girl". She would be perfect in every way; smart, religious, no drugs and bathed once a month. She would enjoy conversation, but not gab nor cackle like and old hen and she will love to laugh(he later changed the bathing requirement to every other week). Two years later, on Christmas Eve, in 1948, she married this handsome young man who lived across the street. He had returned from the war and was studying music at the University of Missouri in Columbia. His name,… Phillip Eugene Brox.
It has been said that after Phil had graduated from the university, he came home late one night from playing in a dance band, or rehearsing with his high school band, Mom greeted him at the door with a butcher knife not knowing who was sneaking into the house. From then on, Dad would whistle a familiar melody, so Mom would know who was at the door. Mom loved music, loved to dance until Dad stomped all the rhythm out of Mom's feet. She said he had two left feet and they were always on top of hers.
Tom was born in Ironton, MO, the town next to Fredericktown, where Dad had his first teaching assignment. On one occasion, while driving along a narrow winding two-lane highway in the Ozarks of Missouri in their first car, the headlights went out. It was foggy and all they had was a flashlight. Sooo, Mom laid down on top of the hood shining the light onto the road, while Dad drove very slowly. That was an experience they didn't want to happen again.
Later, we moved to Warrensburg, Missouri. Roger came along. Mom and Dad were introduced to the Mormon church by the missionaries, but had questions. One of the most important questions was about marriage. She really loved her young family. When the missionaries told her about eternal marriage and families together forever, she knew the church was true. After 6 months of investigating, they were ready for baptism. They joined The Church of Jesus Christ of Latter-day Saints on April 4th, 1954, in Warrensburg, Missouri. Shortly after joining the church we moved to Plains, Kansas, for one year, and then to Liberal, Kansas.
There were only a few members in Liberal and we took turns meeting in each other's homes on Sunday. Over time, our small church group met in the AG building on the county fairgrounds, a bank, and one Sunday (only) in the Odd Fellows Lodge. Jim and Bonnie soon joined the family. Mom and Dad finally got their baby girl.
Mom reared her children with culture and advice. Her most beloved words were, "Wait until your father comes home." Once, when Mom had gone shopping, Tom and Roger were wrestling in the living room. They really liked wrestling when there was furniture to fall over. Mom came home and found the living room in disarray. She knew right away the boys had been wrestling and told us to go out to the front yard and continue wrestling out there. We didn't want to, but she insisted!! It just wasn't the same, soooo, Tom and Roger begged to come back in. For some reason, wrestling in the dirt and grass wasn't as fun as in the house.
Liberal was also known for its pancakes and famous Pancake Day race, parade and city-wide talent show. Women would have to run down the street while flipping their pancakes, competing against the town of Olney, England, Liberal's sister city. The fastest time would determine if Liberal or Olney would get the trophy for the year. Mom always attended the parades and activities and was very involved in many other community projects.
Her life soon took on several adventures including working at the local Ben Franklin store in sales and then at the city's hospital in medical records and the nursery. She was actively involved in her children's sports, PTA programs, scouts, band concerts, dance festivals and always made sure we did our chorescleaning our rooms, washing the dishes, pulling weeds, etc. As Tom and Roger were walking home one evening after a Boy Scout troop meeting and Mom was walking with us, we started a foot race. She beat us home without even breaking a sweat. She had learned to walk twice as fast to keep up with Dad because of the size differencehe almost 6 ft and she only 4'11". Life was never dull.

In the mid 1950's, Mom and Dad bought our first TV. It was a Zenith, black and white. We would spend hours on Saturday watching the test pattern,thinking it was a program. After supper and the homework and chores were done, we would go to bed. One night there was an especially interesting TV program being shown. Tom and Roger would tip toe to the bedroom door and peek into the living room to watch TV. She would say, "Boys, go back to bed and go to sleep." We never knew how she knew we were not in bed. She told us she had eyes in the back of her head. We believed her and every once in awhile would discreetly part her hair to see if there was another set of eyes. It was many months later that we realized there was a door length mirror attached to the bedroom door.
In 1966, the family moved to Oklahoma City. Her church callings included working in the Primary, serving as a Relief Society Secretary, and as a visiting teacher. She also worked at Deaconess Hospital in Medical Records until she retired. Even after a busy day at work she kept her hands busy in the evenings with a variety of sewing and household projects. Sewing was an important part of her life, especially making clothes for the family and eventually making all the shirts that dad mostly wore. She made blankets and clothing for newborn babies at the hospital and the Infant Crisis Center. Sewing was fun!!! She also had a natural touch to cross stitch, crochet and knit. Needle work was a favorite pass time. Often, Mom would sew or crochet all hours of the day and night, in church, traveling in the car, or just watching TV. She entered her needle-work in county fairs and almost always won or received Special Mention'.
Mom felt the need to rearrange furniture often. We never knew how the house was going to look from day-to-day. One night, having worked very late, Dad came home after everyone was in bed. He did not turn on any lights as he went into their bedroom. Very quietly he prepared for bed and tossed his clothes on the floor in the dark. He gently moved to lie down on the bed and was shocked to find himself on the floor next to his clothes. With all the noise and clatter, the lights came on. Mom had rearranged the bedroom that day.
She loved to travel. Our vacations were always an adventureexciting and too short. Family camping was truly an experience, staying at remote gas stations during stormy weather and at KOA camp sites along the way. As before, she always had a tire iron or hammer to protect us. After the children were grown, Mom and Dad toured Hawaii and went on a cruise to Alaska. Mom also went snowmobiling, cross-country skiing and motorcycle riding. She enjoyed her cross-country over-the-road big rig' travels with Tom.

She had great pride in her children's and grandchildren's successes and their accomplishments. She loved life, her many dogs throughout the years and listening to music. It is with great sadness to her family and all others who have known her personally, professionally, and publicly of her passing. Having enjoyed life and overcoming many challenges throughout her life, Betty Lou passed away in her home on the 30th of January, 2013, surrounded by family and those who loved and were close to her. She will never be forgotten. A wife, mother of 4, grandmother of 10 and the matriarch to 19 great grandchildren.