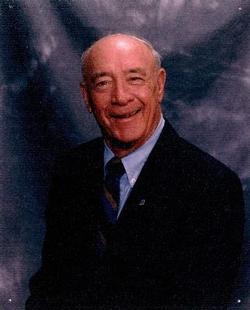 Billy W. Gwinn was born in Yale, Oklahoma on September 23, 1923 as the oldest son of Stanley and Grace Gwinn and died September 24, 2011.
His family moved to Tulsa, Oklahoma in 1933 and Bill graduated from Tulsa Central High School in 1941. He enrolled in Oklahoma A&M in 1941 and remained there until called to active duty with the U.S. Air Force in 1943.
He was commissioned as a fighter pilot in 1944 and served as a P47 pilot with the 20th Air Force on Iwo Jima and the Philippines. He returned to Oklahoma A&M upon discharge from service and graduated in 1949 with a B.S. degree in Geology. He then attended Kansas University and graduated with a M.S. degree in Geology in 1951,
Bill pursued a career as an exploration geologist in the oil industry and dearly loved his profession. He worked for several major and independent oil companies through the Rocky Mountain, Gulf Coast and Mid-Continent areas. He became an independent consulting geologist in 1979 in Oklahoma City and continued his career until retirement.
During a tour in Pensacola, Florida, Bill met Betsy Lynn and they were married in 1955. They moved many times during their early years together and finally returned to his roots, settling down in Oklahoma City in 1969. They enjoyed over 56 years together.
Bill was a sportsman and an outdoorsman. He was an avid hunter, fisherman and golfer, and pursued these hobbies throughout his active life. He was a member of Sportsman&#39;s Country Club; serving as Chairman of the Hunt Club for nearly 10 years.
He was a devoted Christian and served as a deacon and elder at Central Presbyterian Church in Oklahoma City, where they were members for 42 years.
Because of his diverse interests and the many places he lived and worked, he made many close friends and was especially proud of the people he met and loved.
Bill is survived by his beloved wife, Betsy, son, Ross of Conroe, TX, daughter Laura and husband Brent of Oklahoma City, grandchildren, Shelby Bracklein, Stacey Bracklein, and Derek Gwinn, brother, Richard Gwinn, and special friend DeWayne Orr and family.
He will be remembered by his many beloved friends, family and business associates for his unwavering honesty, absolute integrity and his selflessness. His integrity and quiet sense of humor are the hallmarks of his true character.
In lieu of flowers, the family requests donations be made to the Will Bumpus Memorial Scholarship Fund c/o Bethany First Church of the Nazarene, 6789 N.W. 39th St., Bethany, OK 73008, or the Wildlife Conservation Department General Fund, 1801 Lincoln Blvd, Oklahoma City, OK.
A Memorial Service will be held on Tuesday, September 27, 2011 at 11:00 a.m. at Central Presbyterian Church.