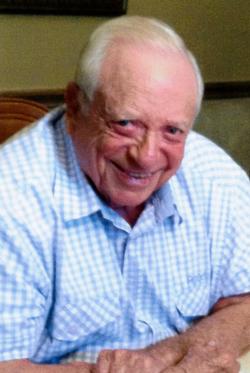 C.E.  Jim Cobb was accepted into the Lord’s waiting arms on July 6, 2017, with Audrey his wife for 64 years by his side. Jim’s life was focused on his loving family, distinguished friends, and an exciting career that involved his community, service to his country, and his Christian faith. Jim was born in Casa, AR on August 17, 1924. He is preceded in death by his parents, Earl and Edna Cobb. Jim is survived by 3 children:  son Robert “Rob” Cobb, and daughters Cheryl Barone (John), and Donna White (Kelly). He has 4 grandchildren:  Johnny Barone, Jeffrey Barone, Brett White, and Lindsey Johns who in turn have given him 8 beautiful and wonderful great-grandchildren.

Jim grew up in Shawnee, OK, where he graduated from high school in 1942. He immediately joined the Air Force and flew P-51s and B-17s during his four years of service. For a short period following his military service Jim played semi-pro basketball and worked at odd jobs for two years. He returned to school while working part-time and completed his education majoring in Human Resources. In 1947 he entered the aircraft industry by joining Pacific Aeromotive Corporation in Burbank, CA. He rose through the ranks over the next 20 years to V.P. of Industrial Relations. In 1971 Jim was offered and accepted a position with Rockwell International, which required moving his family to OKC. After 15 years at Rockwell he then worked several more years for Gulfstream Aerospace.  After retiring he became a member at Quail Creek country club and golf became his hobby. Jim and Audrey also enjoyed traveling for the next few years. He was then summoned back into the business world to an executive position with Medevco Corporation, and then in 2001 founded Personnel Management, Inc., which he continued to operate until shortly before his death.

Throughout his life Jim never met a stranger and made many close friends everywhere he traveled.  His guidance, and his presence, and most importantly his love for his children will never be forgotten.

The family welcomes everyone to a come and go memorial reception from 5:00-7:00 pm Tuesday evening at Buchanan Funeral Service.