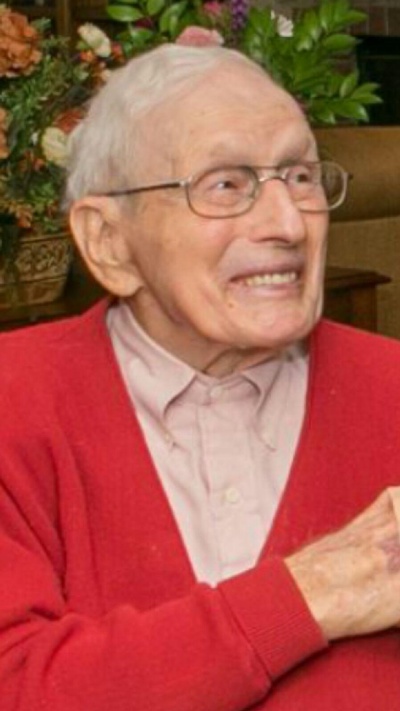 Funeral services for Blayne Thomas Heydman will be Thursday, September 21, at 11 am at the Memorial Christian Church in Oklahoma City with graveside services to be held at 2 pm at Marshall Cemetery at Marshall, OK. Viewing at Buchanan Funeral Home will be Wednesday, September 20, from 1-8 pm. Blayne Thomas Heydman was born on July 4, 1919 in Marshall, OK to Sally and William Heydman. He passed away September 16, 2017. Blayne grew up in the Marshall area and graduated from Marshall High School in 1939. He married the love of his life Aline Ellis on February 4, 1941, after a four year courtship that started when she was 13 and he was 16. He immediately left to serve in the US Army and Aline went on to graduate from Marshall High School in May, fulfilling a promise Blayne made before Mr. Ellis would give them his blessing. He served in the US Army, his highest rank was Staff Sergeant in the medical field. After his honorable discharge, he worked in the oilfield in Brownsville, TX. Then moving on to Oklahoma City where Blayne and Aline would raise their two children, Tom and Cheri. He worked at OG&E for 35 years, was known to arrive before anyone else and stay hours after others had left. They nicknamed him “The Hub” because he kept everything going and everyone working. His work ethic was second to none, and something he was very proud of. While working and raising his family, he attained an associates degree in Electrical Engineering from the University of Oklahoma. Blayne truly had a life of service. After retiring he was a mentor for elementary students in Oklahoma City. He was active at the Memorial Christian Church, where he was a Charter Member and Elder. As well as being an active member of the Masonic Lodge #36 in Oklahoma City, where he attained his 33 rd Degree, and chose the path of the Scottish Rite upon entering the Free Mason’s organization. He was also a member of the India Shrine Temple Of Oklahoma City. He was recently honored with “Wish of a Lifetime” and he chose to meet and visit with four other World War II Veterans. Not only being known as a gentleman, he was also a “gentle man”. Blayne was generous with his time and donations to many organizations. Being very handy, Blayne could fix or repair almost anything, and was not afraid to ask for help when needed. He loved tending to his farm at Cashion, where he spent many hours after work and on weekends. The two loves of his life were his family and the University of Oklahoma. Blayne was a “Sooner” through and through! Being a football season ticket holder, and having the same seats for over 40 years at OU, he then passed on that love to his family. Blayne was survived by his daughter, Cheri Heydman-Jackson, and her fiancé, David Gann of Bethany, OK. One granddaughter, Kylie Jackson of Bethany, OK, and two grandsons, T.R. Heydman and Taylor Heydman of Oklahoma City, (as well as brother-in-law Keith Shoeling of Covington, OK.) He was preceded in death by his parents, his loving wife of 65 years, and his son and daughter-in-law, Tom Heydman and Robin Fleming Heydman. Three sisters and their spouses Francis Whittman (Pete), MonaLea Taliferro (Delrain), and Ruby Shoeling. Two brothers Lavern Heydman and Irvan Heydman (Awanda). In lieu of flowers, contributions may be made the Memorial Fund at the Memorial Christian Church 1915 North Meridian Avenue, Oklahoma City, OK 73107. Pallbearers at the sevice will be T.R. Heydman, Taylor Heydman, Erik Heydman, Mike Kaiser, Rod Moesel and Rollin Nash. Honorary Pallbearers are Bill Heydman, Tom Heydman, and Max Kaiser.