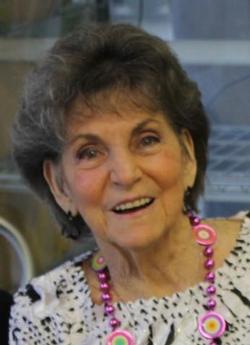 She worked along the side of her husband Bill, who taughther to decorate cakes shortly after they were married. She became known for her beautiful wedding cakes, creative birthday cakes, as well as the portrait cakes she made for many famous artists who came to OKC in concert. She made birthday cakes for Judy the Elephant at the OKC zoo for several years. She taught her two daughters to decorate cakes, while her sons learned how to bake by her husband Billto carry on the family legacy. Katie was a charter member of the OKC chapter of Sweet Adeline's and traveled throughout the US and London for competitions over 40 years. She practiced her competition songs in front of her customers while decorating cakes. She will be missed by so many.

Visitation will be Thursday, August 7 from 8:30 AM to 8:30 PM with family receiving visitors from 6-8PM. Services to celebrate her life will be at 2:00 on Friday, August 8 at the Northwest Church of Christ with burial to follow at Memorial Park Cemetery.