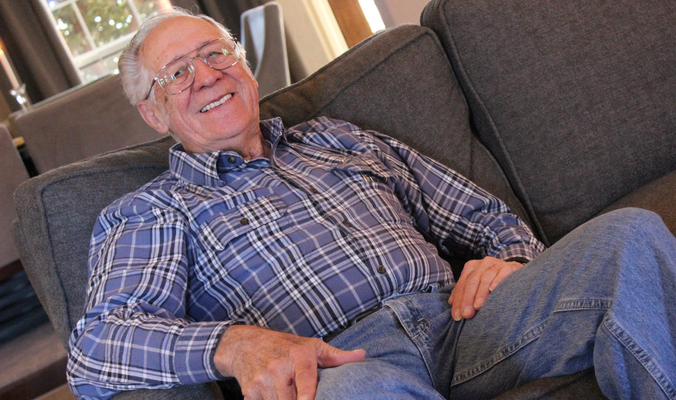 Longtime Yukon Community Volunteer Darrell Burris Succumbs to Brain Disease
On a cool November day in 1934, in a small Oklahoma house with a dirt floor, Darrell Gene Burris began his journey, touching the lives of thousands. What day, exactly, that was, to became a point of contention, because the doctor went on vacation and ultimately forgot the exact date.
“I remember,” his mother Ruby would tell him. “I was there.”

From that humble start, Darrell began a life filled with service to others, not only because it was his faith, but also part of his being. He helped his late father Gene Burris paint and wallpaper houses at a very young age. When his sister Paula (Burris) Casey and brother Randy Burris were born, he helped his mother shower them with love.

When he was just 17-years-old, he saw a tall, beautiful girl walking to school and asked if she wanted a ride. Despite him being a baseball and football star as well as a handsome high school teen, she told him “no.” Day after day he would ask until finally, she agreed to have a coke with him after school. Less than a year later, when Mary Lou Porter was just 15-years-old she and Darrell snuck off to get married.

For six months they kept their marriage a secret by continuing to live with their families and longing to be together. Her father was furious and threatened to annul the marriage when he discovered the marriage. Darrell fought to keep Mary Lou and they remained married for 35 years until one freezing day in 1987 when she was taken too soon from a tragic car accident on the Overholser Bridge on Highway 66 near Bethany. She was just 50-years-old.
Besides Darrell’s love for his wife Mary Lou, he loved his family and many friends. He enjoyed the service members he met during his basic training in the U.S. Army at Ft. Sill and spent time at Ft. Polk and Ft. Belvoir. Hoping to never see active duty he confessed to his commanding officer that he didn’t think he could ever kill another person because he was a Christian. While serving in the army, Darrell learned his trade of printing that would become one skill he would carry throughout the rest of his life.

Civilian life allowed Darrell to use his printing skills by working at several companies including OPUBCO while always dreaming of owning his own shop. In 1979 in Oklahoma City he finally achieved his goal and opened Burris Printing. The company printed material for many clients including Braum’s Ice Cream & Dairy, the National Weather Service Training Center in Norman, Oklahoma, and Stucky’s Diamonds in Houston, Texas, just to mention a few.

When his granddaughter Sarah Katheryn was born, Darrell and Mary Lou’s lives changed forever. After his wife’s death, it was his time with Sarah he said, that saved him. “You’re going to have to learn how to use the dishwasher,” Darrell remembered Sarah telling him. At age 6, Sarah literally saved him when he accidentally caught his kitchen on fire while cooking as he watched a basketball game on TV. There were also the times Sarah tried to force him to eat his vegetables and she would later find them hidden in his napkin.  Darrell struggled with diabetes and she would frequently find his freezer full of Nutty-Buddies and chocolate milk.
His Yukon home on Oak Street frequently became a favorite place for his granddaughter’s giggling teenage friends to hold their slumber parties and New Year’s sleepovers. To this day, a whole generation of Yukon graduates refers to him as “Papa.”

After retiring from printing, Darrell joined the team at Lowe’s in Yukon working part-time, promising all his customers 10% discounts.  He enjoyed using his time away from Lowe’s at the Yukon Bowling Alley where he volunteered to teach over a hundred children in youth bowling classes.  Many of his students even went on to win tournaments.  Darrell’s family and friends lost track of the number of perfect score-300 games he bowled.
Darrell joined his wife Mary Lou in Heaven on Wednesday, April 22, 2020. His granddaughter Sarah and his sister Paula lovingly held his hands while playing his favorite Elvis songs at his assisted living center in Oklahoma City.
Those left behind are his sister, Paula (Burris) Casey and husband Mike Casey of Oklahoma City, brother Randy Burris and wife Vicki of Sautee Nacoochee, Georgia, son Michael Burris and wife Susan of Yukon, son Samuel Burris of Los Angelas, California, granddaughter Sarah Burris of Washington, D.C. as well as nephews Michael Siekel and wife Jeri of Oklahoma City, Scott Wallace and wife Jennifer of Southlake, Texas, nieces Jennifer Burris and Andee Allen of Georgia as well as great nephews and nieces Lucas, Lilyan, Jacob, Brandon Kyle and Dee.
After succumbing to Lewy Body Dementia, Darrell agreed to donate his brain to the Boston University’s study with the Veterans Administration investigating how concussions can contribute to degenerative brain diseases.
Due to the COVID-19 crisis, services for Darrell will be held at a later date when his friends and family can all come together to remember his life.