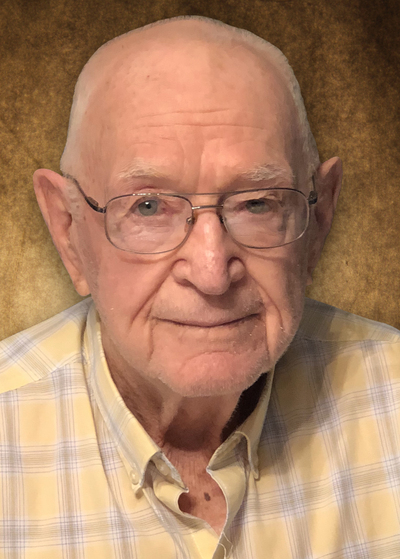 To view the livestream of Donald’s service, please Click Here

Donald Newman passed away in the early morning of February 15, 2021 at Integris Baptist Hospital.

Donald was born June 24, 1924 to Floyd C. Newman and Annie I. (Davis) Newman in Weatherford, Oklahoma.  He attended the Normal View Elementary School and Weatherford High School.  As was common for children living on the farm, Donald helped work the farm.  He fed the chickens and hogs as well as milked cows.  In addition to his farm chores, he was on the wresting team in High School winning 1st place in the Gold Bowl one year.  When Donald was a sophomore, his father went into the hospital in Elk City for several months.  His Grandmother Davis asked him to leave school and to do all the farming while his Father was sick.  In 1936, the family moved to a farm southeast of Weatherford where Donald farmed with his Father – thrashing wheat for the family and others.  This farm was near Verda Mae Smith’s family farm……

Donald said his first real job was when he went to work for Custer County driving heavy equipment building bridges and roads.  He held several jobs – doing dirt work, working  at Skelly’s Service Station in Clinton, working at Smith’s Hardware – before joining a custom cutting crew and driving a combine in Texas, Oklahoma, Kansas, South and North Dakota, to just 30 miles south of the Canadian border.

When he came back home, Donald married Verda Mae Smith on September 7, 1946.  He worked at the City of Clinton Water Department when their daughter Debera Newman was born in 1948.  He also had a stint of work at Stambaugh’s Plumbing before attending a Southwestern Bell Telephone Company party in 1952 with Verda Mae.  At the party, he networked with Mr. Almond and 2 other supervisors who put him to work on the following Monday morning at Southwestern Bell.  During his 30 years at Southwesten Bell, he was a lineman climbing poles for seven and half years and installing buried cable as well.  He also was an installer and switchman, maintaining equipment and using punch cards to determine where the trouble was found.   Donald retired July 10, 1982.

After retirement, Donald and Verda Mae traveled extensively, visiting historical places in most of the central and western states.  They also made trips to Alaska, The Yukon Territory and other parts of Canada.  They began travelling to and wintering in Yuma, Arizona with a childhood friend Keith Pullen and wife Adelle.  Donald’s love of travelling was something he shared with his family, including trips with the grandkids, Cindy and Chad.

In later years, Donald has traveled to several reunions as a member of the First Special Forces Group, in honor of his late brother John Nolan Newman, who was killed in World War II.  He has been to Nova Scotia, Italy, North Carolina and Washington DC for awarding of the Congressional Gold Medal to the First Special Services Force on February 3, 2015.

Donald was an outdoorsman since an early age, fishing and hunting for quail, deer and elk for many years.  He was still a gun enthusiast late in life.

Donald was preceded in death by his parents, by his brother John Nolan Newman, sister Vesta (Newman) Albright, and his beloved wife Verda Mae Newman.

The family would like to thank Josie Cruz and the wonderful nurses and doctors at Integris Baptist Hospital for all there care and kindness.