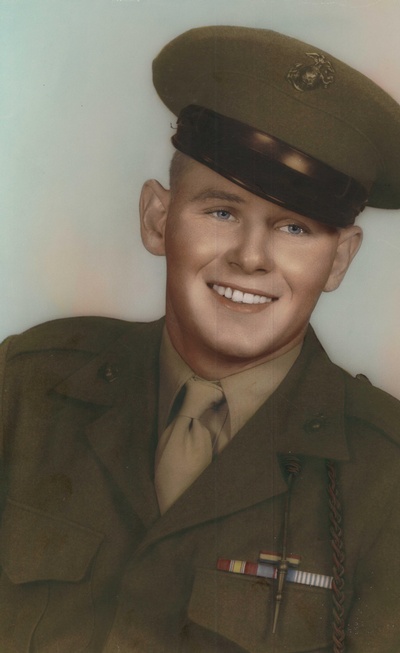 Doyle Lee Easterling, 83, of Piedmont, passed away peacefully on April 9, 2019, at home with his family by his side.

He was born Sept. 23, 1935, in Hobart, Oklahoma, to Walter Marion Easterling and Mary Ellen Easterling, living in a two-room house with his parents and three brothers. He spent his youth in Oklahoma, California and Colorado, working on farms and ranches for members of his family. He graduated from Wilson (Oklahoma) High School in 1953, where he was known to classmates and friends as “Kayo,” short for “Knockout” — a moniker that reflected his rough-and-tumble personality. He enlisted six months after graduation in the U.S. Marine Corps. After basic training in Camp Pendleton, California, he served as a rifleman in the First and Third Marine Divisions in such locations as the DMZ in South Korea just after the cease-fire that halted the Korean War; Okinawa, Japan; the Philippine Islands, and Camp Pendleton. He received the Good Conduct Medal, the U.N. Service Medal, the Korean Service Medal and the National Defense Service Medal, and graduated from NCO School in 1955 and ABC School in 1956. He was promoted to sergeant in May 1956. He was honorably discharged in November 1957. He was extremely proud of his military service and remembered it as one of the best experiences of his life.

After returning to Oklahoma, he obtained his union card and began a long career as a member of the Carpenters Local Number 329 in Oklahoma City. Over the years, he would rise to the level of superintendent for Builders Specialty, overseeing some of the largest construction projects in Oklahoma City. He later went into business for himself and was the co-owner of United Acoustics and Drywall Concepts. In 1982, he became the co-owner, and later the owner, of KC’s Cleaners on South Robinson Avenue in Oklahoma City, selling that business in 1989. He spent much of the remainder of his career working as a carpenter at the VA Hospital, retiring in 1998 after surviving two bouts of cancer. There aren’t many places in the Oklahoma City area that don’t feature a building he helped construct, and he was widely known and respected for the quality of his work.

He and his wife, Kathleen Pierce, of Oklahoma City, were married on July 17, 1959, at St. Joseph’s Cathedral in Oklahoma City. They had met only 11 months earlier while living in the same apartment complex, and she quickly became the love of his life. He always put his marriage first as they raised four children together. With the love and support of Kathy’s mother, Beatrice Pierce, they experienced many adventures and spent more than 60 wonderful years together. They were loving, devoted partners and parents, and their union served as a model of commitment.

Doyle loved taking his family on cross-country drives, taking several journeys to Milwaukee, Wisconsin, to visit his wife’s family; Pasco, Washington, to visit his brother Ronald’s family; and Alamosa, Colorado, to visit the family of his favorite uncle, Robert Dalton Witten. In the summer of 1969, he drove his family to Petersburg, Alaska, in a Ford Ranger pickup while hauling a mobile home — a 10-day trip that covered approximately 3,000 miles and the last leg of which was taken by ferry. The family lived in that remote village on the Pacific Coast for the entire summer, where their entertainment consisted primarily of fishing and taking the only road out of town to the landfill to watch black bears come out of the forest and pick through the refuse for something to eat. Petersburg was so isolated and news was so hard to come by that Doyle and his family did not learn that the crew of Apollo 11 had landed on the moon until three days after the fact. The family returned to Oklahoma in the fall, and that adventure became the stuff of family legend.

He loved watching his children play sports and teaching them to water ski. He enjoyed listening to live music and going dancing. He was an avid reader, devouring thousands of books, and loved history and Westerns. He took great pride in his collection of Americana objects that decorate the bar in his Piedmont home, and he relished telling stories about his days in the Marine Corps and his travels as a young man. He loved watching OU football, celebrating happy hour and playing practical jokes.

Doyle was preceded in death by his father, Walter Marion Easterling; mother, Mary Ellen Easterling; brothers, Ronald, Raymond and Kenneth Easterling; and mother-in-law, Beatrice Pierce. He is survived by his wife, Kathleen Easterling, of Piedmont; children, Patrick Easterling and wife Susan, of Yukon; Michael Easterling, of San Juan County, New Mexico; Karen Garrison and husband Alan, of Oklahoma City; and Kelley Scott, of Tulsa. He is also survived by eight grandchildren, Regan, Meghan, Kayla, Zachary, Samuel, Rachel, Ryan and Tara; one great-grandchild, Hunter; and many nieces, nephews, family members and friends, all of whom will miss him dearly.

The family wishes to thank Dr. Robert Salinas of the University of Oklahoma Family Medicine Clinic and the staff at Humanity Hospice for their kindness, compassion and dedication, especially clinical director Angie Gustafson.