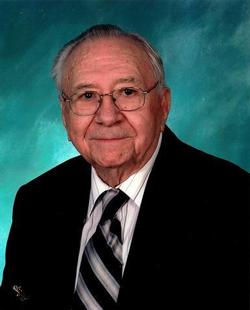 THOMAS,
E. Glen, 91, went to be with the Lord on July 1, 2009. He was born June 29, 1918 in Tahlequah, OK to Walter & Amy Thomas. He grew up in Stilwell, OK until the age of 17, when he joined the CCC?s at Guthrie, OK. There he met & married Dorothy Lowe on 12/10/1938. They enjoyed 51 years of life together. In 1944, Glen went to serve his country in World War II. He won numerous battle honors as a sergeant in the infantry while serving in France & Germany. He returned home in 1946. Glen moved with his wife & daughter Patsy to Enid, OO in 1947 to begin the ice cream department at Gold Spot Dairy, where he worked until he retired in 1985 as their plant superintendent. While at Gold Spot, he won numerous awards for his fabulous ice cream making. Glen & Dorothy moved to Bethany, OK in 1985. His wife, Dorothy preceded him in death in 1990. In 1991 he met and married Maxine Mays & they enjoyed 17 wonderful years together. Glen was a member of Bethany Church of Christ. He was also preceded in death by his parents, 2 brothers & 1 sister. He is survived by his wife, Maxine Thomas of the home; 2 daughters, Patsy Janzen & husband Virgil of Oklahoma City, Susan Fulton & husband Joe of Tucson, AZ; step-daughter, Lisa Roberts & husband Tommy of Duncan, OK; 1 brother, Milton Thomas of Laquey, MO; 4 grandchildren; 2 step-grandchildren; 7 great-grandchildren; 2 step-great-grandchildren and 1 great-great-grandson. Services to celebrate his life will be 10:00 AM, Saturday, July 4th at Buchanan Funeral Service Chapel with burial to follow at Bethany Cemetery.