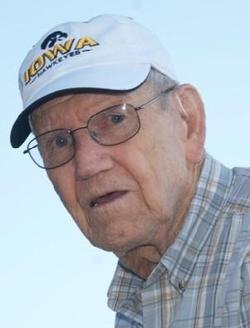 Earl Preston Hale of Byng, OK, formerly of Oklahoma City passed from this life September 30, 2011. Born August 30, 1923 in Markham, TX to Wm. M. and Ida Mae (Brown) Hale, he grew up in Matagorda County the youngest of seven children. He married Jean Whittington December 30, 1942. He served in the Army in WWII, 103rd Infantry in Europe, and was awarded a Purple Heart, Bronze Star and Silver Star. After his military service Earl played football for OU and was a geologist with Gulf Oil. He was preceded in death by his wife of 68 years, his parents, three brothers and three sisters. He is survived by daughter Mary Lee Looper and husband Garry of Byng, OK, two granddaughters Kelly Fike and husband Matt of Byng, OK, and Marla Looper, of Iowa City, IA, three granddaughters Kaylen, Kendall and Kirsten Fike of Byng, and a host of nieces and nephews. He was known to most as &quot;Gangan&quot; and was the biggest fan that any daughter, granddaughter or great granddaughter could ever have. He was a strong, steady, silent man and will be greatly missed. Visitation will be Monday, October 3 from 10 AM – 8 PM at the funeral home. Services will be at 1:00 PM Tuesday, October 4, Buchanan Funeral Service Chapel with burial to follow at Rose Hill Cemetery.