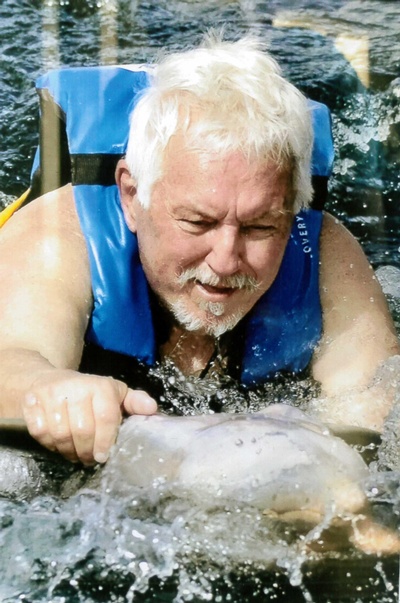 He was a Chicago Bears, Blackhawks and Cubs fan.    He fought heart disease, diabetes, Parkinson’s and eventually lost the battle to lung disease.  He fought hard because that who he was.  He taught each of us to do the same.  He told me from a young age that life isn’t easy so you have to work hard to accomplish what you want.  As his son, I have always tried to live by those words.  I have tried to pass that down to his grandkids, Sydney, Camden and Jaden.  They love him so very much.  He was everything you think of when you hear the word Grandpa.

Dad loved to travel, read, fish, spend time with family, do crossword puzzles, eat good food and attend events for his grandkids.   He always enjoyed watching Sydney play softball, Camden play hockey and Jaden play baseball.  He would even go so far as to have Sydney’s softball team come to his house between games to rest and eat.  Once he had grandkids, the word no ceased to exist in his vocabulary.  In his eyes, they could do no wrong.

My DAD helped make me develop into the person I am today.  He guided and pushed me in school, and provided the advice I needed to help me transition into a successful career.  I can only hope that I will continue to make him proud and can pass that on to my kids.  I never really wanted to follow in his footsteps of being an accountant, but somehow that is just how it worked out.  We both worked for the same public accounting firm, although many years apart, and we both became CFOs.  We had so much fun going to Blazers, Barons and Camden’s Oil Kings hockey games, fishing (although it could be frustrating when I had to do all the work before and after Haha) and just going to our lake house. I didn’t spend as much time as I should have as I have gotten older, but he always seemed to understand.  I will miss my DAD more than I will ever be able to put into words. I LOVE YOU DAD!!!  I will never forget you.  Love Mike.

Sydney was his first grandchild and I don’t think there has ever been a prouder Grandpa.  He was always shy to hold little babies, but not his Sydney.  He has books of pictures all over his house just to show her off.  He said on so many occasions how proud he is of her and how successful he knows she will be.  He loved to watch her play softball, especially when she would throw a runner out at second base with her cannon for an arm.   At the end, I think one thing that made him so proud was when he heard Sydney had hit her first homerun over the fence.  He was lying in a hospital bed, but still managed a huge smile and a big thumbs up.  Sydney said “My grandpa was one of a kind. There’s never been a better grandpa, and there never will be. He listened to me rant about my softball teams, my mountains of homework, and everything under the sun that I complained about. His laugh was contagious, putting a smile on my face despite whatever mood I was in. He always told me how proud he was of me, supporting me in all the decisions I’ve had in my life. He was always in my corner, never left, cheering me on through my lows and highs. When he would get to come to my softball, I played harder than I ever did, just because I knew I had all the love I could ever need sitting in the stands. One of my favorite memories was when we went to his favorite Italian restaurant, “Johnny Carino’s”. He took my best friend Mehgan Ray, my mom, and me out to eat after a game. The table was quiet when the waitress came and asked Mehgan “Would you like a soup or salad?” and Mehgan replied “What’s the difference?” thinking she said “Would you like a super salad?” The look on my grandpa’s face will always be the funniest thing in the world to me. He looked at her like she was insane, and he’s probably right. Also, he let my entire softball team and I come crash at his house after a two back-to-back games. He was so generous, and honestly one of my biggest supporters. He will never be far away.  He will always be in my heart. I love and miss you so much grandpa, don’t party too hard up there now.”

Camden was truly his fishing buddy, no questions asked.  He would joke about how Camden would “bug” him about going fishing, but Grandpa wouldn’t have it any other way.  He absolutely loved every minute of it. Many times he and Cam would come in from fishing and Dad would be sunburned.  When we started to get on him about not coming in when he felt the burn starting, he just grinned and said “Cam and I were having fun. The sunburn will heal.”  He also loved to watch his grandson, the future Chicago Blackhawks starting goalie, play hockey.  He would always comment how impressed he was with how good Camden has gotten in such a short time of playing.  Camden says “My grandpa was one of the best people in my life.  We both loved to fish and loved fishing together even better.  Some days were not as good as others, but at the end of the day it was all great because we were there together.  We had some funny moments and would laugh through them. We had great times.  My Grandpa was a great guy and I love him so much.”

Jaden was his little buddy.  He would laugh to see Jaden come up with excuses not to eat things he didn’t want to eat.  No matter how many times it happened, he would laugh so hard when Jaden said he was full, but not too full to have dessert.  Just like Grandpa.  Jaden loved to stay at Grandpa’s because he would take him to Elevations and just sit and watch him jump. They walked around his pond together in the evenings.  Jaden told me that he loved being over there because grandpa didn’t double check to make sure he brushed his teeth. He also sat through many baseball games, always cheering on his favorite player #21.  Jaden might not have been a fisherman, but that was ok because grandpa loved baseball too.  He commented on more than one occasion that he could see his little guy being a great ballplayer.  He loved anything Jaden did.  Jaden says, “Grandpa was the best.  I loved him so much. He was the best at everything. He always said try your best. I try to be the best just like him.

Gene has been in my life since I was 17. He has laughed with me, cried with me and been an amazing support system. He was what I like to call a gentle giant.  He always made things better by just listening and holding my hand. We had the most outrageous debates about politics, each of us on the opposite side of the debate. Never once did it end in anything but laughter and us both saying “you’re nuts”. Mike actually yelled at us to shut up about politics one day. When Mike turned around Gene smiled at me and winked. He told me I was a great mom. The last few years have been hard on me. When I would talk to Gene, he would remind me that I am smart, strong and he loved me.  He said he could not have asked for a better person to be a member of his family.  Those are my words of comfort now. The last time I saw him, I kissed his forehead as I was leaving and said I love you. He said I love you too. I can’t believe that was the last time I saw him.  My gram told me that god answers our prayers. He may not have answered the way we wanted, be he answered the way that is needed.  So as I prayed for healing for Gene, I believe god delivered that, just not in the way I wanted. He healed his pain by bringing him home. I hope heaven can appreciate the incredible man that entered their gates. He will be forever loved and missed. His spirit lives on through the eyes of Mike, Kathie, Sydney, Camden and Jaden. I love you. Thank you for enriching my life with your wisdom, support and love.

My Dad taught me a lot. His favorite word was DILEMA. And he would let me figure how to get myself out of it by good conversation.  The best saying he taught me that I use is “if you want to soar with the eagles you can’t hang with the turkeys.” I love you Dad! Love Kathie.