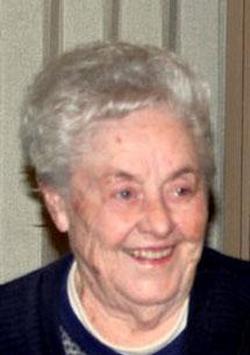 Thelma Fern Daniels loved to watch the birds in her backyard and her late husband, Everett Daniels, deal with the 'critters' nibbling on their tomato plants in the summer from
her vantage point on their back patio.

She was dazzled by the beauty of flowers, bright colors, the coming and going of the seasons. She also loved to cook and made rich pecan pies from scratch, including the dough, always a holiday treat. Cooked a mean pork roast.

She was president of her garden club three times in Midwest City, where they lived more than 38 years and Everett worked and then retired in civil service at Tinker Air Force Base. They traveled some. Relatives, sight-seeing. Oregon, Cincinnati, Florida, Texas.

She worked in retail sales as a young woman, TG&Y in Anadarko, Montgomery Ward in Duncan, Penny's in Chickasha and Oklahoma City, then she stopped working and devoted her later years to gardening, cooking, bird-watching.

Fern died January 29 in an Oklahoma City hospital after brief health complications and after battling Alzheimer's Disease for a number of years. She was 89.

She never let go of her smile until the very end.

Burial will be in Memory Lane Cemetery in Anadarko in a private service.