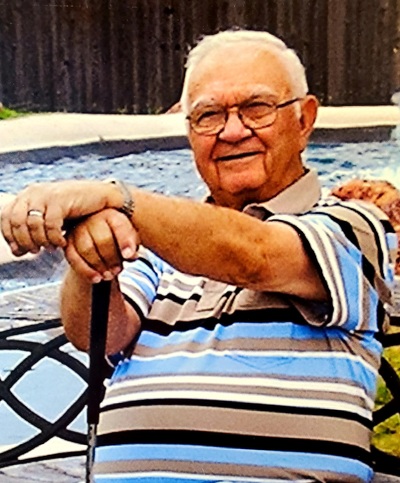 Francis C. Smith, “Don”, passed away on October 28, 2020. His final days were spent surrounded by his family and friends he loved so much.

Don was born on June 25, 1931, in Marion County, S.C. to parents W.P. and Willie Smith. He enlisted in the U.S. Air Force and while stationed in Oklahoma City he met and married Rosie Filippo.  In Japan, Don and Rosie adopted their only son, Phillip. Don served for twenty-two years in the Air Force, worked at Tinker AFB for many years, and then managed the supply department for Union Bank.  In retirement he played golf and travelled with friends, until Rosie’s death in 2006. In 2014, he married the second love of his life, Paula Marshall Pennington, who was with him until the end.

Don is preceded in death by his mother and father, and brother Norman Smith of Augusta, Georgia. He is survived by his wife, Paula Smith of the home, son Phillip D. Smith (wife Shelley), grandchildren Mackenzie Rose Smith, Luke Harrison Smith and Chase Phillip Smith, all of Oklahoma City, stepchildren Stacy Cherry (Michael Costlow), Cheri Seale (Bryan), Kevin Marshall (Whitney) and several step-grandchildren and one step-greatgrandchild. Viewing will be Tuesday, November 3 at the funeral home with family available to greet friends from 5-7pm. A memorial for Don will be held in the chapel of Buchanan Funeral Service, Thursday, Nov 5 at 2 PM, followed by military honors at Resurrection Cemetery.

*Masks will be required for anyone attending the service. If you are feeling any symptoms of COVID-19, please stay home. A recording of the service will be available on Friday for anyone unable to attend.