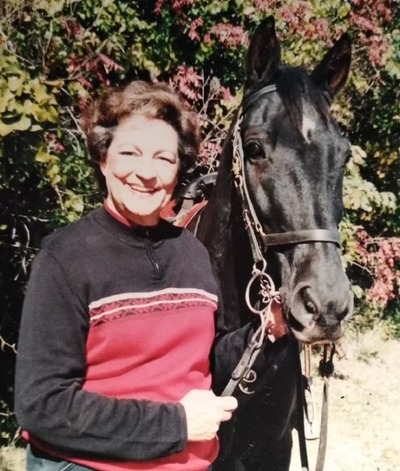 Shirleys’ first marriage ended in divorce and she married Keith Leo Smith, the love of her life,  in 1982.  They were happily married until Keiths’ death in June of 1997.

Shirley grew up in a very close knit family and was especially close to her father.  When she was 11 years old, Shirleys’ father became blind in both eyes.  Her relationship with her father flourished at this time, as he took great joy in listening to his beloved daughters’ colorful descriptions of the sunset in the evenings.  In addition, Shirley read the newspaper to her father every day and developed a keen understanding of politics, business and most of all sports.  The sports section was the highlight of their reading time and as a result, Shirleys’ understanding and passion of sports would rival the most experienced sports commentators.

Next to sports, Shirley was equally passionate about horses.  After her late husband Keith retired, he made the way for Shirleys’ lifelong dream to come true and purchased Shirley her first horse. Shirley spent most of her days caring for her horses and going on challenging trail rides all over the state of Oklahoma and New Mexico.  Many times, Shirley ended up riding horses alone, so she founded a horse lovers’ group called “The Trailriding Gals” whose motto was “Never ride alone again!”  The group grew to over 100 passionate horse lovers!

Shirley was known for her love of horses as well as her amazing sense of humor, quick wit and stunning memory.  Up until the end of her life, she demonstrated an exceptional ability to remember names, dates, events, fun family memories and some not so fun family memories!