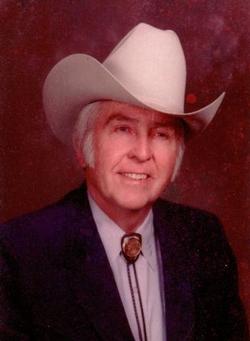 Ridley,
Fred Allen, Jr., a lifelong resident of Oklahoma City, passed away September 2, 2012. The Ridley family has been active in the cattle industry in Oklahoma, both in ranching and in the commission business, for four generations. Fred was the grandson of R. C. ("Coach") Ridley, who sold the first head of cattle on the Oklahoma City stockyards in 1910, and the son of Fred Allen Ridley, Sr., who played a large role in building the Oklahoma City cattle market into the largest stocker /feeder market in the world. Fred Jr. followed in his father's footsteps, both as a rancher and owner of the Oklahoma Livestock Commission Company. "Freddy," as he is known by his friends and cattlemen around the country, spent his entire career (over 70 years) carrying on the family tradition of conducting business on the basis that a man's word and his handshake could be trusted. Fred is survived by his wife, Betty Ann, two sons, Fred Allen III and Clay Kent, and a daughter, Drue Alexis Ridley, in addition to seven grandchildren and five great-grandchildren. He was an active member of the Christian Science church in Oklahoma City. In addition to a private service for the family, there will be an opportunity for friends to gather to honor Fred's life of achievement. The service will be held on Saturday, September 8, at 2 p.m., officiated by longtime business associate Mike Fisher, at Buchanan Funeral Home, 8712 N. Council Road, Oklahoma City. In lieu of flowers, the family requests that donations be made to Fifth Church of Christ, Scientist, 10305 N. May Ave., Oklahoma City, 73120, towards its new edifice.