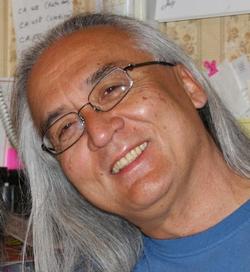 Jimmie grew up in Japan before moving to the United States and becoming a U.S. citizen in 1959. In his youth, Jimmie and his younger brother Daniel, moved throughout the country with their mother, Akiko Henderson, and their father, Bernard Henderson, a long-serving member of the U.S. Army.

In the late 1960's, Jimmie met and married Annette Akers, a Lumbee Indian, and they lived in New York during the 1960's and 70's. On August 31, 1970, their first child was born, Angelina. Jimmie and Annette had an adventurous union – attending the famous Woodstock Music Festival together, traveling the country to attend powwows where they made and sold Native jewelry, and always asking questions of the world around them. Jimmie, Annette and Angelina moved to Oklahoma in late summer 1978. On July 29, 1979, their second child was born, Akio. Jimmie became a grandfather on May 4, 2004 when Akio's daughter, Lillian Dreamer, was born.

Throughout the 1980's, Jimmie managed many restaurants and hotels in Oklahoma City, including Cajun's Wharf, Joe Kelly's and the Best Western Saddleback Inn. In the early 1990's, Jimmie decided to become a nurse and received a degree in nursing from Oklahoma State University–Oklahoma City. He served as a nurse for 22 years and worked in nearly every major hospital in the greater Oklahoma City area and as a "traveling" nurse in New Jersey and Philadelphia. With his caring heart, intelligent mind, sharp wit, and sense of humor, he dedicated himself to providing his patients with true healing and wellness. He was also quick to offer any assistance he could to his fellow nurses, doctors and hospital staff to benefit his patients and his fellow caregivers.

Music was central to his heart with some of his favorite artists being Frank Zappa, Grateful Dead, Jimi Hendrix, Pink Floyd, Enigma, and Baba Maal — just to name a few as he had a huge music collection. He always had a camera (or two) in his hand and would take many pictures at family events and also take pictures of seemingly random flowers, trees, birds – anything in which he saw some beauty. He much enjoyed discussing current events, cooking, reading the newspaper, coffee, ice cream and was a vegetarian. He was an avid reader and found insight in everything from the Sunday funnies to his two favorite books: The Alchemist and Illusions.

Jimmie will be greatly missed by all who knew and loved him. Service to celebrate his beautiful life will be at 3:00 p.m., Thursday, September 6, 2012 at Buchanan Funeral Service. Before the Service, there will be coffee, water, pictures and memorabilia. Following the Service, we will have a reception and share some of Jimmie's favorite foods and music.