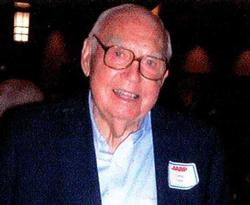 Summers
George A. Summers, Jr, 85, passed away Friday, April 3, 2009. He was born in Wetumka, OK, to George and Rosa Gower Summers. He graduated from Wetumka High School in 1941 and joined the US Marine Corps. George served as a Naval Aviator from 1942 to 1946 and was honorably discharged with the rank of Captain. His years in the Marine Corps inspired the patriotism that lasted throughout his life. George graduated from Oklahoma A&M in 1948, worked in agricultural chemical field sales and retired from Union Carbide in 1980. George became a volunteer in the AARP Driving Safety Program in 1986. He served for over 20 years in various positions including instructor, state coordinator and SW Regional Director. He enjoyed working with the volunteers as well as the citizens, young and old, helping them become safer drivers. George married Holleen Hartpence in Stillwater in 1947, who predeceased him in 1970. He was also preceded in death by his parents and brother, Truman. George is survived by his loving wife of 29 years, Louise Glass Hargrove and daughters, Sheralyn Selph and husband, Harry and Susan Steele and husband, Jim. He is also survived by step-daughter, Lisa Rauch and husband, David and step-sons, Bob Hargrove and David Hargrove and wife, Gaylene. George has four grandchildren; Lindsey Selph, Ashley Brumby and husband, Otis, Brad Steele and wife, Angie and Whitney Riggs, five step-grandchildren; Matthew Rauch, Melissa Davis and husband Kyle, Regina Hargrove, Bryan Hargrove and wife, Stephanie and Taylor Hargrove and wife, Cara; two great grandchildren, Kinsey Steele and Alex Riggs. George loved life, travel, sporting events and especially his friends and family! His family wishes to thank the compassionate staff at the Odyssey House In-Patient Unit for their special care. A Celebration of his Life and Memorial Service will be held Tuesday, April 7th at 11:00 am at the Buchanan Funeral Service Chapel with internment following at 3:00 pm in the Fairlawn Cemetery, Stillwater. In lieu of flowers, friends may wish to make a memorial donation to the OSU Foundation, PO Box 1749, Stillwater, OK, 74076 or to the charity of their choice.