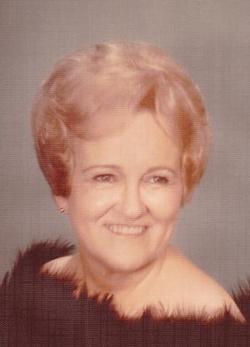 Gladys Ola Shockley, 96, of Oklahoma City went to be with the Lord on November 2, 2012.
She was born on November 13, 1915 in Union City, Oklahoma. Gladys was a successful business
Owner and loving mother of three boys. In 1974 she helped founded High Noon Woman's Association and was an active member of American Business Woman's Association for many years where she was Woman of the Year from 1988-1989. She owned and operated Gladys Shockley Interiors alongside her husband Bernard Shockley from 1964 until his death in 1977.
Gladys then continued to run her business until 1996 when she retired. Gladys was preceded in death by her Husband Bernard Shockley and her son Kenneth. She is survived by her sons Eugene and Douglas Shockley and their wives
Georgia and Sandra Shockley, grandchildren Joel Shockley, Cheryl Dent and Marissa Brown. She is also survived by 12 other grandchildren as well as many great grandchildren and nieces and nephews. Gladys is also survived by her sister Juanita Hess.
Gladys was also an avid fan of NASCAR Racing which she enjoyed watching with her grandson Joel
The family would like to say a special thanks to one of her caregivers, Lorna Little. Her time and loving care was greatly appreciated by Gladys's family.
Gladys will be available for viewing Sunday at the Buchanan Funeral Home located at 8712 North Council road in Oklahoma City.
Services will be held Monday November 5, 1:00 pm, at Resurrection Memorial cemetery located at 7801 NW Expressway, Oklahoma City.