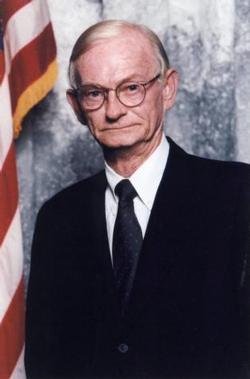 MOON,
Larry Horton, 76, of Oklahoma City went to join his Heavenly Father on December 10, 2012 with his daughter by his side. Larry was born August 13, 1936 in Oklahoma City to Herman and Velma Ruby Moon. He was the youngest of five boys and grew up in Oklahoma City, graduating from Capitol Hill High School in 1954. Larry attended Oklahoma City University, receiving a BSN in Economics, a bachelor's degree in Science and Business, and later a Juris Doctorate from the Oklahoma City University School of Law. After law school he served as a special judge in District 16, and then he went into private practice, then he worked for the department of labor and later for the Oklahoma Tax Commission, from which he retired. Larry was articulate and witty with many great friends and colleagues; he was generous with his time and skills, and always willing to help those in need. Larry was a devout Christian who enjoyed weekly bible studies and adored his seven granddaughters. He was preceded in death by his parents and his four brothers. Larry is survived by three children that filled him with immense pride; Charles Moon, Stephen Moon, and Mollie Luanne Moon; seven beautiful granddaughters; Michelle, Rebecca, Amanda, Whitney, Victoria, Esther and Claire; three wonderful great-grandsons; Mason, Carson and Jacob; sister-n-law, Lawanda Moon; and many lifelong friends.

Services to celebrate his life will be 3:00 PM, Thursday, December 13 at Bridgeway Church, 228 W. Hefner Rd. in Oklahoma City.