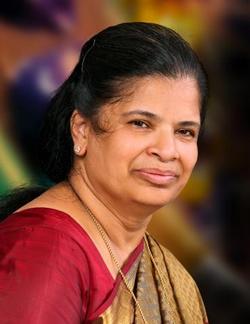 Gressamma (Grace) Joy Melakayil, 61, went to be with her Heavenly Father on March 27, 2015. Grace was born in Changanacherry Taluk, Kerala, India on November 14, 1953 to T. C. Thankamma (of the Thottathil family) and K. V. George (of the Kandathiparampil family). Grace lived all of her childhood in Changanacherry and then moved to Vagamon, Kerala, India after her wedding. In 1993, Grace came to Oklahoma City with her family and has been a faithful member of the Epiphany of the Lord Catholic Church for the past twenty-two years.

Grace was known for her love of family and her fierce loyalty to them. She was a devoted wife and deeply cherished by her husband. She was a wise, nurturing mother and greatly loved not only by her son and daughter but also by her daughter-in-law and many nieces and nephews. Among her friends, she was a confidant. She was always a caretaker; whether it was the family chickens and goat as a young girl or her patients at St. Ann's Nursing Home and later at Mercy Hospital for the past fifteen years. She was most fulfilled while engaged in the simple joys of gardening, taking part in the quieter, simpler, morning Mass, and her tea times. Grace's kindness, sincerity, generosity, and friendship will be deeply missed by all who knew and loved her.

Grace was preceded in death by her husband, Joy Zachariah Melakayil; her father, K.V. George; and her mother, T.C. Thankamma.