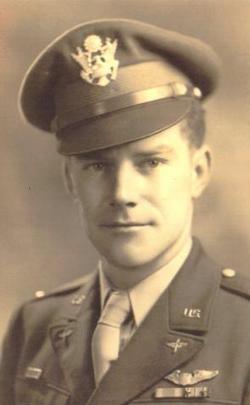 Guy W. Brown was born in Eagle City, OK to Milton Brown and May (Twist) Brown. He was preceded in death by his wife of 40 years, Pat (Ritter) Brown; his sister Milta and her husband, Richard Finley. Guy is survived by his son, Greg and wife Kim; his brother, Lee Brown and wife Harriet; and numerous nieces and nephews. He was a veteran of WWII Army Air Corps proudly serving in the European Theater of Operation with the 9th Air Force as a pilot of the P-47 aircraft. Following WWII he served in the Air Force Reserves where he piloted a variety of aircraft. Guy graduated from Central State College with a BS degree in accounting. He began his production accounting career in the oil and gas industry with Shell Oil ultimately retiring from the Kerr McGee Corporation. He enjoyed anything to do with vintage aircraft, reading, Big Band music, baseball, football, and painting but most of all, spending time with family and friends. Guy was a strong family-centered husband and father. He always saw the humor in life, no matter how badly he felt. He frequently had a joke or a funny story to tell. He was a man that gave much more than he took. He constantly thought of others before himself. Visitation will be Friday, January 4, 2013 from 9AM to 8PM at the funeral home. Services to celebrate his life will be 2:00 PM, Saturday, January 5, 2013 in the funeral home chapel with interment to follow at Chapel Hill Memorial Gardens.