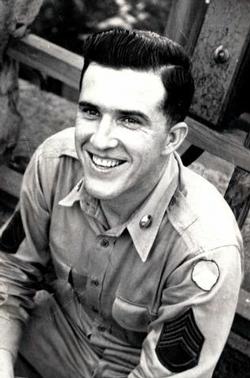 Harold William Spradlin was born in Anadarko, Oklahoma, on May 23, 1931, to Clarence and Malinda Spradlin, and went to heaven to meet his risen Savior on Resurrection Sunday, April 20, 2014. He was preceded in death by his mother, father, sisters Christine Cook and Juanita Price, and brothers Charles and Clarence Spradlin.

He worked for Chickasha Cotton Oil Mill, and then enlisted in the U. S. Army during the Korean War. He served two years on active duty stationed in Japan, where he wrote his "princess" Norma a letter every day.

After army service, he was a member of the U. S. Army Reserves, worked for Superior Oil Company, graduated from the University of Oklahoma with a B.A. in Accounting in 1961, and passed the CPA exam in the same year. He worked for Peat, Marwick, Mitchell; served as a CPA in public accounting for 14 years; and worked in banking and mortgage for about 10 years. He received a master's degree from and taught accounting courses at Oklahoma City University for several years. He loved teaching , was an excellent instructor, and was well liked by students and faculty. Harold served in the Oklahoma National Guard and was a member of the American Legion, the Oklahoma Society of Public Accountants, and the American Institute of Certified Public Accountants.

Harold loved the Lord, the Bible, his family, his country, his church and Connections Class, gardening, making jelly, telling jokes and just generally being ornery.

Harold is survived by his wife Norma; daughters Sandra Fairchild and husband Don, Stacy Stewart and husband Mike, and Rebekah Whittaker and husband Greg; and grandchildren Wyatt and Shane Fairchild, Ryan and John Stewart, and Samuel and Gabrielle Whittaker; sister Mary Belle Shafer of Wichita, Kansas; and many nieces and nephews.

A special thank you is sent to all the wonderful doctors and nurses at Deaconess Hospital who served Harold and his family during his last illness.

Weird Harold will be greatly missed by all his family and friends. See you later, alligator!

Visitation for friends and relatives will be Wednesday, April 23, from 5 to7 p.m. at Buchanan Funeral Service, 8712 N. Council Road, Oklahoma City.