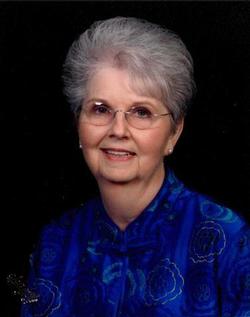 Geraldine "Geri" Walker died peacefully with family by her side on March 1, 2014, in Oklahoma City, OK. She was a devoted wife, mother, and grandmother and will be remembered with great love by her family and friends.

Born in Boswell, Oklahoma, on May 20, 1939, Geri was one of seven children. She graduated from Boswell High School, where she was a member of glee club and met Dan Walker, her husband of 57 years.

Geri was a full-time homemaker and a charter member of North MacArthur Church of Christ. She enjoyed traveling, shopping for antiques, reading, and family gatherings, where her famous chicken and dumplings were the "hit" of holiday dinners and her chocolate gravy and biscuits brought children and grandchildren home from hundreds of miles away.

Memorial donations may be directed to the Oklahoma Chapter of the Alzheimer's Association: www.alz.org/oklahoma